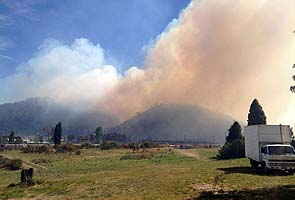 Smoke rises from a fire near Lithgow, west of Sydney

Sydney: The destruction toll continued to rise on Saturday from some of the most costly wildfires to ever strike Australia's most populous state as fire fighters prepared for worsening conditions.

In the Blue Mountains west of Sydney, one of the worst hit regions in fire-ravaged New South Wales state, 193 homes have been destroyed and another 109 damaged by the fire storm that peaked Thursday, the Rural Fire Service announced Saturday.

The damage toll is more than double the last count announced on Friday and will continue to rise as assessment teams and police move deeper into the destruction zone in search of survivors and victims. Homes have been reported destroyed in other regions, but numbers are not yet available.

A 63-year-old man died of a heart attack Thursday while protecting his home from fire at Lake Munmorah, north of Sydney, and at least five people - including three fire fighters - have been treated in hospitals for burns and smoke inhalation, officials said.

Police are investigating allegations that two girls aged 12 and 13 tried to light a fire in a woodland on Sydney's western fringe on Friday. Fire fighters were able to extinguish a small fire in that area without damage to property.

Police said in a statement the girls had been questioned and released. No charges had been laid but an investigation was continuing.

Arson investigators are examining the origins of several of more than 100 fires that have threatened towns surrounding Sydney in recent days.

The wildfires have been extraordinarily intense and extraordinarily early in an annual fire season which peaks during the forthcoming southern hemisphere summer which begins in December.

Around 1,500 fire fighters have been back burning to contain blazes since winds and temperatures became milder on Friday. Several roads in fire-affected areas north, west and south of Sydney have been closed.

On Saturday, 83 fires were burning across the state including 19 uncontained blazes.

"It's just calmed down a little bit and obviously we're bracing ourselves for these worsening conditions," Rogers told Australian Broadcasting Corp. radio.

"What we have is a time for the crews to anticipate the weather coming ahead and try and get as much containment as possible and prevent that fire threatening major population centers when we get worse weather," he said.

Promoted
Listen to the latest songs, only on JioSaavn.com
Wildfires are common in Australia, though they don't tend to pop up in large numbers until the summer. This year's unusually dry winter and hotter than average spring have led to perfect fire conditions.

In February 2009, wildfires killed 173 people and destroyed more than 2,000 homes in Victoria state.