Deforestation Wiped Out 8% Of Amazon Rainforest In 18 Years: Study

The Amazon plays a vital role in curbing climate change, but destruction of the rainforest has only accelerated in recent years, found the study. 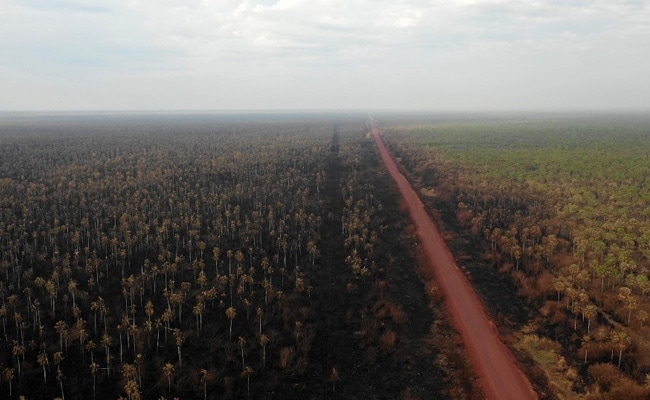 Damage caused by wildfires in Otuquis National Park, southeast of the Amazon basin.

Deforestation in the Amazon destroyed an area bigger than Spain from 2000 to 2018, wiping out eight percent of the world's largest rainforest, according to a study released Tuesday.

The Amazon plays a vital role in curbing climate change, but destruction of the rainforest has only accelerated in recent years, found the study by the Amazon Geo-Referenced Socio-Environmental Information Network (RAISG).

Since the turn of the millennium, 513,016 square kilometers (198,077 square miles) of the rainforest have been lost, according to the updated Amazon atlas produced by the organization, a consortium of groups from across the region.

"The Amazon is far more threatened than it was eight years ago," RAISG said in a statement.

The consortium found that after making gains against deforestation early in the century, the Amazon region has again slipped into a worrying cycle of destruction.

But the destruction has since surged to startling levels.

"In 2018 alone, 31,269 square kilometers of forest were destroyed across the Amazon region, the worst annual deforestation since 2003."

"The statistics presented by RAISG are an alarm bell on the increasing pressures and threats facing the region," said researcher Julia Jacomini of the Socioenvironmental Institute (ISA), a Brazilian environmental group that is part of RAISG.

The atlas "shows the importance of building an alliance of Amazon countries, which is non-existent at the moment, to fight those growing pressures and threats," she told AFP.

The report comes as world leaders prepare for a virtual summit this weekend aimed at breathing new life into the 2015 Paris climate accord, whose goals on slowing the warming of the planet are currently set to be missed.

Forests such as the Amazon play a vital role in controlling climate change because they absorb carbon from the atmosphere.

However, when their trees die or burn, they release carbon back into the environment.

The destruction in Brazil has only accelerated since far-right President Jair Bolsonaro took office in 2019.

Deforestation in the Brazilian Amazon surged to a 12-year high of 11,088 square kilometers from August 2019 to July 2020, according to government figures.

That was a 9.5-percent increase from the previous year, when deforestation also hit a more than decade-long high.

Bolsonaro has come under fire from environmentalists and the international community for cutting funding for rainforest protection programs and pushing to open protected lands to agribusiness and mining.

He has presided over a surge in wildfires in the Brazilian Amazon since taking office.

There were more than 89,000 of them last year, at one point sending a thick haze of black smoke all the way to Sao Paulo, thousands of kilometers away, and causing worldwide alarm over the future of the rainforest.

There have been even more fires so far this year: 101,434 and counting.

Experts say the fires are largely caused by farmers and ranchers bulldozing and burning trees to clear land for agriculture -- an illegal but widespread practice.

Deforestation is also surging in Bolivia and Colombia, RAISG found.