In recent weeks North Korea has issued a series of vitriolic condemnations of Seoul over the flyers, which it says insult the dignity of its leadership -- a reference to leader Kim Jong Un. 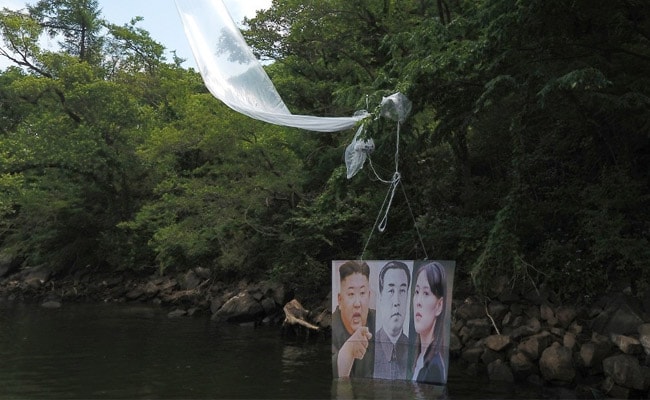 A balloon carrying a banner with portraits of North Korean leaders launched in Hongcheon. (AFP)

In recent weeks North Korea has issued a series of vitriolic condemnations of Seoul over the flyers, which it says insult the dignity of its leadership -- a reference to leader Kim Jong Un.

Tensions are rising on the peninsula, with the North blowing up a liaison office and threatening to bolster its military presence in and around the Demilitarized Zone.

Analysts say Pyongyang is staging provocations in an effort to force concessions from Seoul and Washington, with nuclear talks at a standstill.

Authorities in the South have sought to block leaflet launches, but activist group Fighters for Free North Korea said they had launched 20 balloons near the border city of Paju late Monday night.

As well as half a million flyers, the group also sent 1,000 USB sticks -- which typically showcase South Korean dramas and music -- and 2,000 one-dollar bills, which encourage people to pick up the material.

"The anti-North leaflets flew to the North on the southerly wind," group leader Park Sang-hak said, vowing to continue the launches.

Pyongyang is threatening to retaliate with leaflet launches of its own, with the official KCNA news agency reporting Monday that 12 million leaflets had been produced and 3,000 balloons prepared to send them south.

The two Koreas regularly used to trade propaganda, but agreed to stop at a summit in 2018.

Inter-Korean relations have been in deep freeze following the collapse of a summit in Hanoi between Kim and US President Donald Trump early last year over what the nuclear-armed North would be willing to give up in exchange for a loosening of sanctions.

South Korean President Moon Jae-in initially brokered a dialogue between Pyongyang and Washington, but the North now blames him for not persuading the United States to relax sanctions.