Death toll rises to 12 in Indonesia mine collapse 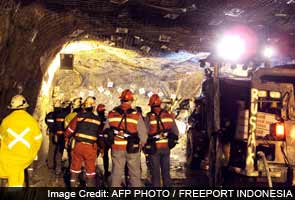 Timika, Indonesia: Twelve workers have been confirmed dead after a mine tunnel collapse in eastern Indonesia, but 16 others are still unaccounted for five days after the accident, the US operator said on Sunday.

Rescuers on Saturday retrieved one more body and spotted the remains of six other workers, although they have not managed to reach them yet, said a statement from the Indonesian subsidiary of Freeport-McMoRan.

Ten workers were rescued alive following the accident on Tuesday at the firm's Grasberg mine, one of the world's biggest gold and copper mines high in the mountains of rugged Papua province.

Rescuers' progress "has been slow work because of the need to stabilise the ground and roof for every metre of debris and rock they clear", the statement said.

The tunnel was part of an underground training facility and not one of the mining areas. Those inside at the time of the accident were direct employees and contract workers attending a safety training course.

Operations have been suspended since Wednesday to show sympathy with those affected, and the company has given no indication when operations will resume, or what might have caused the accident.

A group of protesters calling for safer working conditions continued to block a road at the mine on Sunday, but company spokeswoman Daisy Primayanti said the situation was under control.
Comments
Indonesia mine accident