'Death To Blasphemers' Increasing As Political Rallying Cry In Pakistan

Mashal Khan's grieving family, now also under police protection, say they have little hope the shocking campus killing will prompt a re-examination of blasphemy laws that carry a death penalty, or action against the mob justice that often erupts in such cases. 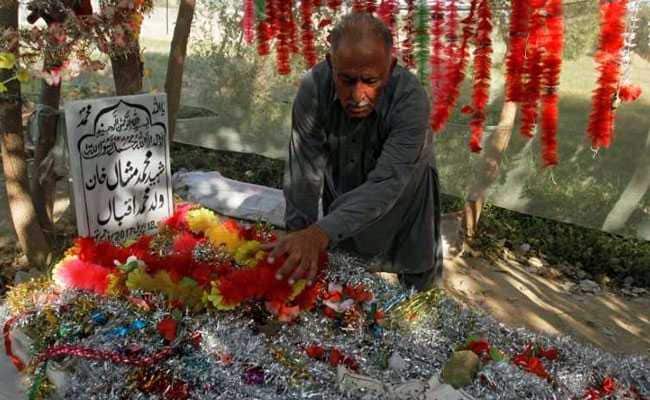 Iqbal Khan puts decorations on the grave of his son Mashal Khan, who was killed over rumours of blasphemy

Swabi, Pakistan: Three police officers stand daily guard at the tomb of Pakistani student Mashal Khan to prevent religious hardliners from fulfilling threats to blow up the grave of the 23-year-old beaten to death over rumours he blasphemed against Islam.

His grieving family, now also under police protection, say they have little hope the shocking campus killing will prompt a re-examination of blasphemy laws that carry a death penalty, or action against the mob justice that often erupts in such cases.

On Friday, there was more evidence the opposite is happening.

A new political party that has made punishing blasphemers its main rallying cry won a surprisingly strong 7.6 percent of the vote in a by-election in Peshawar, 60 km (36 miles) from where Mashal Khan was killed six months ago.

The party's relatively strong showing - and a separate outcry over a proposed change to an election law that outraged the religious right - has elevated blasphemy into a potent political issue in the run-up to a general election in 2018.

While Tehrik-e-Labaik (Movement of the Prophet's Followers) is unlikely to break out of single digits in coming votes, its rapid rise, along with another ultra-religious party, could create an additional challenge for the ruling Pakistani Muslim League-Nawaz (PML-N).

The PML-N party's leader, Nawaz Sharif, was ousted as prime minister in July by the Supreme Court, and opposition leader Imran Khan - who spearheaded the legal case that removed him over unreported income - is seeking to press the advantage.

But the gains by the Labaik party - formed just last year - have grabbed attention.

Labaik draws most of its support from the Barelvi branch of Sunni Islam, the largest sect in Pakistan that is traditionally considered moderate. Though the party does not publicly talk about its funding, the Barelvis have a network of mosques and madrassa religious schools that collect donations.

The party emerged out of a protest movement against the state's execution of Mumtaz Qadri, a bodyguard of the governor of Punjab province who gunned down his boss in 2011 over his call to reform Pakistan's blasphemy laws, among the world's harshest, to prevent abuses.

Qadri is considered a hero by the party, and its candidate in Peshawar, Muhammad Shafiq Ameeni, was equally supportive of Mashal Khan's killers, although the student's death was not a main feature at campaign rallies.

"It was state's responsibility to punish a blasphemer, no two opinions, but when state doesn't do its job and someone does kill, he shouldn't be punished as a murderer," Amini said, referring to the 57 people who face trial over Mashal Khan's death.

In Pakistan, allegiance to Islam is the official line of most major parties, but ultra-religious parties have so far remained on the fringes.

Labaik is one of two new ultra-religious parties formed in roughly the past year.

Together, Labaik and the Milli Muslim League (MML) gained about 11 percent of the vote in last month's by-election in Lahore and 10.4 percent in Peshawar, whereas the established religious parties, such as Jamaat-e-Islami and Jamaat Ulema-e-Islam, combined had 5.3 percent in the 2013 national election.

Blasphemy is such an effective wedge issue in Pakistan because there is almost no defence against an accusation.

For that reason, say critics, blasphemy laws are often invoked to settle personal scores and to intimidate liberal journalists, lawyers and politicians.

Dozens of Pakistanis are sitting on death row after being convicted of insulting Islam's prophet, a specific charge that carries a mandatory death sentence, though no executions have been carried out in recent decades.

Now, political parties may be in danger of facing blasphemy accusations themselves.

Earlier in October, the PML-N found itself in the middle of a firestorm when it voted through seemingly small changes to the nation's electoral law.

The changes, among other things, turned a religious oath in the electoral laws stating that Mohammad was the last prophet of Muslims into a declaration using the words "I declare".

The alterations prompted accusations of blasphemy from the religious right and the government quickly retreated, terming the change a "clerical" mistake and apologising in parliament.

Labaik has vowed to hold a mass rally on Nov. 6 to demand the lawmakers responsible be prosecuted for blasphemy.

Even before the Labaik party's political debut, politicians found promising swift action against blasphemers an easy way to appeal to conservative voters.

The next month, Mashal Khan was accused of online blasphemy and beaten to death by fellow students and religious activists as onlookers filmed the scene. Sharif said he was "shocked and saddened" by the "senseless display of mob justice".

At least 67 people have been killed over unproven blasphemy allegations since 1990, according human rights groups.

Mashal Khan's father, Iqbal, said his son was the victim of false rumours.

The family has received death threats from right-wingers and Mashal's sisters had to drop out of school.

"The snakes our country nurtured are now biting us," the father said, two days before the Peshawar by-election, standing beside his son's gave strewn with flowers, lace and poetry.

Learning of the Labaik party's gains a few days later only made him more pessimistic about the government's ability to stop abuse of blasphemy accusations.

Promoted
Listen to the latest songs, only on JioSaavn.com
(Additional reporting by Mubasher Bukhari in LAHORE and Jibran Ahmad in PESHAWAR; Writing by Asif Shahzad and Kay Johnson; Editing by Alex Richardson)
© Thomson Reuters 2017