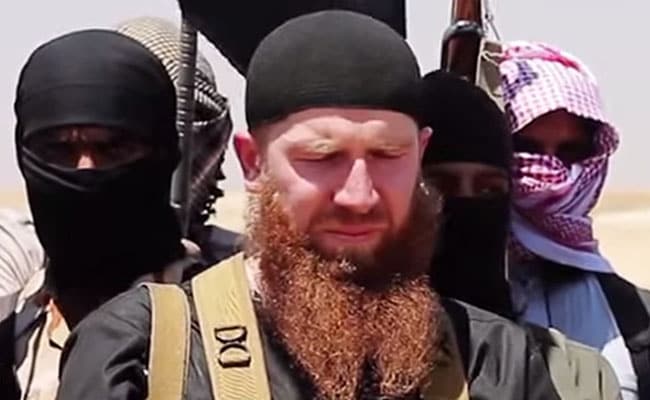 ISIS Minister of War, Abu Omar al-Shishani has been killed in combat in the Shirqat, Iraq. (AFP Photo)

Baghdad: The death of ISIS's "minister of war" may disrupt its operations, a senior U.S. military officer said on Thursday, and an Iraqi security expert said it could damage the group's important recruitment efforts in ex-Soviet republics.

Abu Omar al-Shishani (the Chechen), a close military adviser to ISIS leader Abu Bakr al-Baghdadi, was killed in combat in the Iraqi district of Shirqat, south of Mosul, Amaq, a news agency that supports ISIS, said on Wednesday.

It was the first confirmation of Shishani's death, which the Pentagon said in March had probably occurred as a result of a U.S. air strike in eastern Syria.

Pentagon spokesman Peter Cook said on Thursday that Shishani had been the target of an attack on Sunday against an ISIS leadership meeting near Mosul. Cook said the department was aware of reports Shishani had been killed but was not currently able to confirm that.

Cook said the United States believed Shishani was killed in March but learned recently that he might still be alive and decided to carry out a strike targeting him. He said the Pentagon was still assessing the results of the strike.

Hisham al-Hashimi, who advises Iraq's government on Islamist armed groups, said Shishani had been wounded in the March attack but was treated at a hospital in Shirqat, an ISIS stronghold about 250 km (160 miles) north of Baghdad.

He said Shishani was killed earlier this week in a nearby village along with an aide by an air strike during combat with U.S.-backed Iraqi forces closing in on the area.

The commander of the U.S.-led coalition battling ISIS, U.S. Army Lieutenant General Sean MacFarland, expressed confidence in the intelligence that led to the recent strike on Shishani in the Tigris River valley where Shirqat is located, but declined on Thursday to declare him dead.

"We're being a little conservative in calling the ball on whether or not he's actually dead or not. But we certainly gave it our best shot," MacFarland told reporters in Baghdad.

Some analysts speculated that Shishani might in fact have died in March but ISIS delayed its announcement to allow time to line up a successor.

Yet there was no immediate word from ISIS about who would take over for the ginger-bearded jihadist who held as many as three senior posts and was a strong force for recruitment from Russia's mainly Muslim North Caucasus region and Central Asia.

"(IS) lost something important: the charisma that he had to inspire and seduce Salafists from Chechnya, the Caucasus and Azerbaijan - the former Soviet republics," Hashimi said.

Asked about the potential impact, MacFarland said it could disrupt ISIS operations if Shishani were indeed dead. "They would have to figure out who's going to pick up his portfolio," he said.

Born in 1986 in Georgia, then still part of the Soviet Union, Shishani once fought with Chechen rebels against the Russian military in the Caucasus province. He then joined independent Georgia's military in 2006 and fought in its brief war with Russia two years later before receiving a medical discharge, according to U.S. officials.

Shishani was one of only a few Islamist leaders with a professional military background and had several hundred fighters, mostly from ex-Soviet republics, under his command when he came to prominence in a 2013 battle against Syrian President Bashar al-Assad's forces in northern Syria.

His role in the capture of Menagh air base, which since has been ceded to regional Kurdish forces, was one of the first big victories by Russian-speaking militants in ISIS's rapid capture of large swathes of territory in Syria's civil war.

Hashimi said it was not clear who ISIS would choose to replace Shishani, but it was likely to be someone with a similar ethnic background.

"The replacement must be Chechen because there was an agreement between (ISIS) and the Army of Muhajireen and Ansar that this position must be filled by a Chechen," said Hashimi, referring to a Syria-based militant group that split when Shishani pledged allegiance to Baghdadi.

According to photographs circulated online, road signs erected in areas controlled by Islamist State are sometimes written in three languages - Arabic, English, and Russian - testifying to the important role of Russian speakers.

In many cases those rebels have been influenced by Islamist insurgencies at home, pushed out of their own countries by security crackdowns, and won advancement in ISIS through their military skills and ruthlessness.

In June, a Russian official said up to 10,000 militants from ex-Soviet republics were fighting in the ranks of jihadist groups in the Middle East.

Shishani's group grew to about 1,000 fighters by the end of 2013, according to a notice issued by the U.S. government, which offered up to $5 million for any information that would help to track him down.

Shishani also may have helped ISIS seize the Iraqi city of Mosul in 2014, the victory that established the group as the most potent Islamist security threat in the Middle East.

The suspected attackers in last month's attack on Istanbul airport had ties to ISIS and were from Russia and the formerly Soviet Central Asian states of Uzbekistan and Kyrgyzstan, Turkish officials say.
© Thomson Reuters 2016