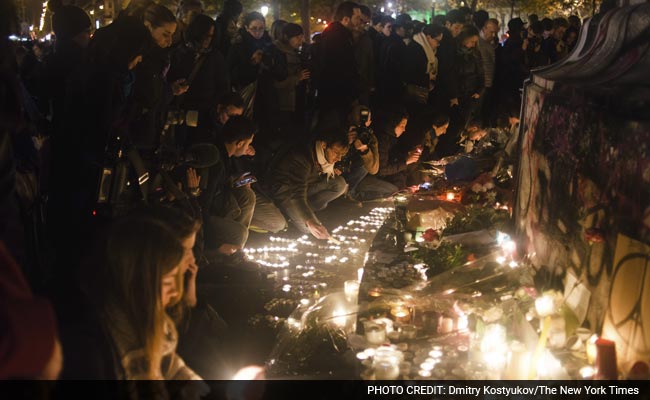 People bring flowers and light candles at the Republic square during a vigil for victims of the terror attacks in Paris, November 14, 2015.

PARIS: "It was a scene of absolute horror. It will live with my men for ever."

That was how Christophe Molmy, the head of France's BRI, an elite police unit, described the scene at Le Bataclan, the concert hall in central Paris that was the site of the deadliest attack on Friday. Molmy spoke to i-Tele TV on Thursday about the assaults in Paris that left a total of 129 people dead and more than 300 injured in France's worst peacetime terror attack.

At Bataclan alone, 89 people died. The theater was packed with people attending a concert by the California band Eagles of Death Metal when the three perpetrators burst in. The attackers shot into the crowd at random. After the night's carnage, survivors talked of chaos, panic and piles of bodies inside the theater.

This is Molmy's account of how the assault ended.

The BRI team on duty had just finished dinner when it first heard via the media about explosions at the national soccer stadium Stade de France, the site of the night's first attack, where a friendly match between France and Germany was under way. French President Francois Hollande was among the spectators.

"We'd had a somewhat tiring week and we had just eaten."

It wasn't immediately clear to the BRI team at the start if it was an attack or just an accident. Then it heard about the shootings in Paris, again from the media. The team headed for Bataclan without waiting for orders from above.

"We took off immediately."

The first shots at the Bataclan theater had been fired by the terrorists at 9:45 p.m. When the BRI got there at 10:15 p.m., local police had already killed one of the assailants. The other two had gone upstairs with 20 hostages, but that wasn't immediately known to the police.

The BRI team slowly worked its way through the building. There was an eerie silence, with not a shot fired, bodies everywhere and people too shocked or frightened to move or even speak. In the orchestra pit of the theater lay the dead, the wounded and the able-bodied.

The BRI had to check them out one by one to make sure the terrorists weren't among them. Dogs sniffed for explosives and the police checked for suicide vests. For the first 15 minutes, the BRI worked on securing the lower part of the theater, evacuating the able-bodied and starting to extract the wounded.

The BRI then headed upstairs, going through the Bataclan room by room. It was a slow process because each time they had to form a column, stick their heads in, clear the room, then move on to the next one. Practically every time a door was opened, there was a group of terrorized people, all of whom had to be checked. The conditions were "abominable," because the team had to walk over dead bodies.

"We went from cupboard to cupboard, into the toilets; all of that takes an enormous amount of time. It was extremely tense."

At 11:15 p.m., the team came upon a closed door. A hostage, who had been made a spokesman by the terrorists, shouted from the other side of the door and asked the men to stop, saying there were 20 people being held and they would be killed or beheaded if the police advanced. The police talked to the hostage spokesman five times over a mobile phone. The terrorists, through the spokesman, made no real demands; they just provided justifications for the attack.

"In a situation like that you have to understand that we face very different terrorists from what we've known. Now, we have extremely determined terrorists who want to commit mass murder. Who kill, who then retreat, entrench themselves, and who want to die as martyrs. They're not seeking negotiations. They're not asking for a car to escape, money, freeing people from prison. We get the same declarations, 'You attacked the Islamic State, we're at war and we're responding to your attacks.'"

At 11:45 p.m., the prefect gave the go ahead for a police assault. The team knew it was facing terrorists at the end of a narrow corridor with hostages between them.

"Certainly one of the worst scenarios."

The BRI team formed its columns, with a medical team waiting in the stairwell. The men pushed forward just after midnight.

"We were in a war operation."

The men advanced behind an 80-kilogram (176-pound) "bouclier," or shield, which was hit by 27 bullets. They pushed forward, driving the two terrorists to the end of the corridor, while shielding the hostages. None of the hostages was hurt or killed, even by the terrorists, during the assault, "which is extraordinary."

The column reached a flight of stairs and the shield fell forward. The first two officers in the column were exposed so the police opened fire.

"If all of a sudden they'd raised their hands and stopped, we would have arrested them. But we were facing people who had fired, who had reloaded."

The suicide-bomb-vest-wearing terrorists were hit several times before they blew up. It wasn't clear if the terrorists blew themselves up or the bullets triggered the blasts.

The hostage drama had ended.