Mummified Body Of Man Found On A Drifting Yacht, Hunched On A Table 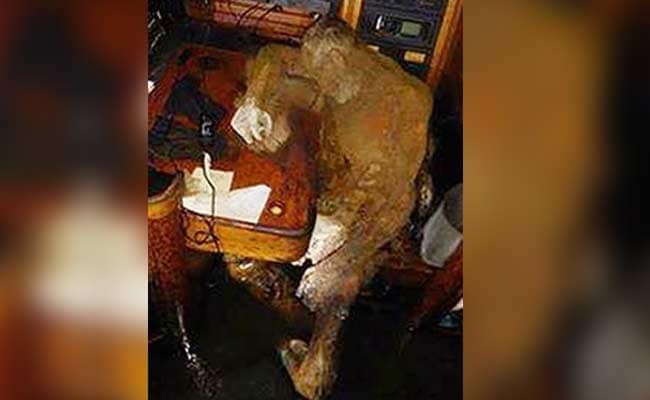 Photo provided by the Philippine National Police Barobo Station, a man's remains is seen on a yacht near the shore off Barobo township, Surigao Del Sur province in southeastern Philippines.

Manila: A German sailor whose mummified body was found on a yacht adrift off the southern Philippines had died of a heart attack about a week earlier, according to an autopsy report released today.

Police earlier named the victim as Manfred Fritz Bajorat, based on documents found on the yacht last Friday, but still do not know where he had sailed from or where he was heading.

"The cause of death is acute myocardial infarction based on the autopsy by (the) regional crime laboratory," national police spokesman Chief Superintendent Wilben Mayor told AFP.

"The German national is estimated to have been dead for more or less seven days," he added, citing a statement by police in the southern Philippines.

Bajorat was a 59-year-old veteran yachtsman who left his native Germany two decades ago and lost his long-time wife several years ago, according to Germany's Bild daily, which quoted an old friend.

The newspaper also published pictures of the man hunched over a table in the main cabin, and cited forensics experts who explained that a combination of tropical heat, dry wind and salty sea air can quickly preserve or mummify a corpse.

Police in the town of Barobo on the east coast of Mindanao island, where the corpse was taken, said the German embassy was arranging for a relative to fly to the Philippines.

"It appears he has a daughter based in Germany and the embassy is to fly her here to identify the dead body," Chief Inspector Dominador Plaza, the Barobo police chief, told AFP.

'Around The World Trip'

Local fishermen found the white-hulled, 13-metre (44-foot) yacht with a broken mast adrift on the western edge of the Pacific Ocean on Friday.

Police launched an inquiry to determine whether Bajorat had been the victim of a crime, but the autopsy result indicated otherwise.

The area where the boat was found is some 100 kilometres (60 miles) off Barobo, said the town's deputy police chief Inspector Mark Navales.

"The... salt water in the air could have mummified his body," Navales added.

German-language documents, old pictures of a family visiting Paris landmarks, rice and tinned food lay scattered in the cabin of the boat, which had taken in water and was listing, police said.

One document photographed by police indicated the boat had obtained clearance from maritime police in Sao Vicente in 2013, although it was unclear if it was issued in Cape Verde or Brazil, which both have ports of the same name.

Bild quoted an old friend as saying Bajorat "emigrated 20 years ago, first to the Netherlands, then he wanted to travel around the world with his wife".

"I haven't seen him since then," said the friend, who added that he had stayed in contact with Bajorat via Facebook once or twice a year.

"The last time was a year ago. At the time he said he wanted to go on (another) around-the-world trip," said the friend.

The sailor's wife of some 30 years, Claudia, was believed to have died years ago, likely in 2010 on the Caribbean island of Martinique, said Bild.