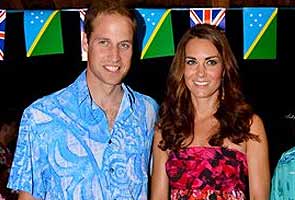 Copenhagen: Danish celebrity magazine Se og Hoer plans to publish topless pictures of Prince William's wife Catherine in a 16-page spread on Thursday, it said on its website on Wednesday.

"Se og Hoer has exclusively (in Denmark) obtained the pictures of the topless Duchess of Cambridge, Kate. Tomorrow we will publish a 16-page spread full of piquant photos of England's future queen," it said.

The pictures, whose appearance in other publications have infuriated Britain's royal family, will only be available in the weekly's print version available on newsstands on Thursday, and not online.

"Our readers love to follow the lives of the royals and they want scoops. I am therefore incredibly proud that we have obtained the rights to provide the topless pictures of Britain's future queen -- which the whole world is talking about but very few have actually seen," Se og Hoer chief editor Kim Henningsen said on the website.

Promoted
Listen to the latest songs, only on JioSaavn.com
The paparazzi pictures, showing Kate sunbathing topless in the south of France several weeks ago, have already been widely circulated on the Internet after they were published by French magazine Closer as well as Ireland's Daily Star and Italy's Chi magazine.