The chicken curry scandal was hatched when Prime Minister Scott Morrison, who makes no secret of his family curry-cooking efforts, posted images of his Sunday dinner to Facebook.Facebook critics quickly spotted a piece of apparently glistening pink chicken flesh poking out of the creamy sauce. 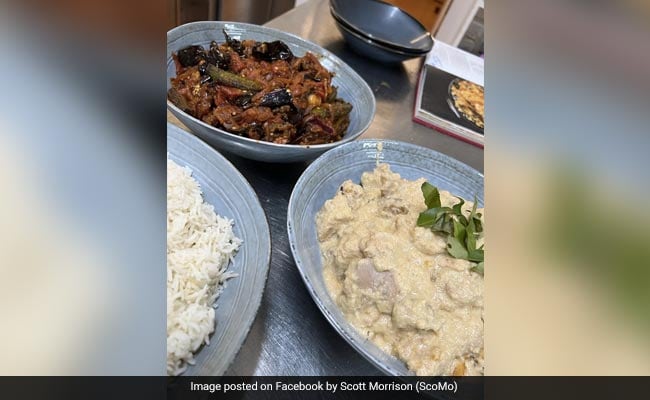 Beyond the grave issues of rising living costs, an overheating planet and corruption, here are a few of the more surprising developments that Australia's May 21 election campaign has thrown our way:

The chicken curry scandal was hatched when Prime Minister Scott Morrison, who makes no secret of his family curry-cooking efforts, posted images of his Sunday dinner to Facebook.

"Nice to have a night at home. So curry it is. Sri Lankan Tamarind Eggplant and Okra Curry and a classic Chicken Korma. Strong Curry. Strong Economy. Stronger Future," he posted on May 1.

But Facebook critics quickly spotted a piece of apparently glistening pink chicken flesh poking out of the creamy sauce.

"A good vet would have that chicken back on its feet in a few minutes," joked one of more than 9,000 commenters.

"I can reassure you, the chicken was cooked," Morrison replied on his Facebook page.

The prime minister flatly denied the meat was raw in a radio interview, blaming a trick of the light.

"It is absolutely untrue. People went back for seconds. It was in the pan for a good 45 minutes, I can tell you, because I had it there myself," he said.

"It was just the way the light bounced off the skin of the chicken."

Three days before the vote, Morrison barrelled into a young boy during a friendly children's football game in Tasmania, eliciting a chorus of stunned "ooohs" from spectators.

At first, Morrison -- shorn of his jacket, but still sporting a shirt and tie -- sauntered around the field somewhat aimlessly, trying to get a toe on the ball in the five-a-side game.

But then the 54-year-old stepped it up a gear, hunting down a cross-field pass that threatened the opposition's pop-up mini-goal.

Morrison, who recently described himself as "a bit of a bulldozer", propelled himself forward to intercept the pass. Unfortunately, a small red-haired boy about two-thirds of Morrison's size was in the way.

Realising what he had done, Morrison threw his arms around the kid in a hug and lifted him off the ground, as a coach sprinted across for an impromptu Head Injury Assessment and photographers switched to rapid-fire.

The shocked interjections turned to muffled laughs as the youngster dusted himself off and Morrison sheepishly rose to his feet.

On the "gotcha" scale of reporters' questions testing politicians on policy details, it should have been an easy one: What is the national unemployment rate?

"The national unemployment rate at the moment is, I think it is five point... four, sorry, I am not sure what it is," he said.

Australia's unemployment rate is at a 13-year low of four percent.

Since that stumble early in the election campaign, some Australians have expressed doubts about the value of such questions.

A couple of days after Albanese's gaffe, Greens leader Adam Bandt was asked by a journalist whether he knew the wage price figures.

"Google it, mate," he replied.

Venturing into a pub, where patrons may have had a few beers to loosen their tongues, carries certain risks for politicians.

Australia's prime minister confirmed this by popping into the Edgeworth Tavern near Newcastle, about 120 kilometres (75 miles) up the coast from Sydney.

Surrounded by TV reporters, an elderly man stood right in front of Morrison and angrily berated him over the level of disability pensions.

"This is what you said when you got elected last time: 'We are going to help all those people who worked all their lives, paid their taxes, and those who have a go, get a go'," he said.

"Well, I have had a go, mate. I have worked all my life and paid my taxes," he added.

"We've had quite a chat," Morrison summarised before the man let loose with a couple of expletives to express his frustration with the prime minister.