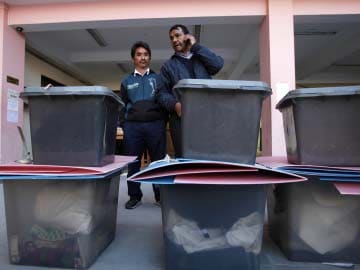 Kathmandu: The residents of landlocked Nepal go to the polls on Tuesday, picking from more than 100 political parties in an election that is not expected to produce a strong winner to deal with the country's deep-rooted problems.

Poverty, fuel shortages and corruption - and a lack of a Constitution - have all been the overwhelming features of a nation appearing to sink deeper into turmoil by the day.

"What is the use of voting for these same old faces, who have done nothing for the country and only fought among themselves for their own benefit," said Pema Gurung, a vegetable vendor in Kathmandu, the capital.

Like many Nepalis who have grown weary of the political dysfunction, she did not even bother registering to vote.

The goal of Tuesday's election is to name a 601-member Constituent Assembly tasked with writing the constitution - which is supposed to govern the Himalayan country of 27 million.

Nepal has been through this process before.

A previous assembly was tasked with writing the Constitution in 2008, following the end of a 10-year Maoist insurgency and the overthrow of the centuries-old monarchy.

But the assembly was riven by infighting and never finished its work. The result is a power vacuum that has left the country without a proper constitution for nearly seven years and which has stalled badly needed development and aid projects.

Some of the disagreements center on whether to divide the country into a federal system based on ethnic groups or strictly by geography. But the parties mostly squabble over who gets to lead the country.

And the prospects do not look good for this election, with Surya Prasad Shrestha, a former chief election commissioner, saying there is "no way" a single party will win a majority.

"It appears that a hung parliament is inevitable because the bigger parties have lost their grip and smaller parties are mushrooming. There is bound to be instability," Shrestha said.

No matter the result, writing a constitution is difficult because each clause requires approval from two-thirds of the assembly, in a country with more than 100 ethnic groups and languages.

In Kanchanpur, a town 500 kilometers (310 miles) west of Katmandu, Bhajora Rana, a farmer who had lost everything in flooding this year, said earning his vote is simple.

"We have 17 families in our village," he said. "We will vote for anyone who is able to give us any help."

Many in Nepal say the political bickering magnifies the serious problems the poor south Asian nation faces. Residents face up to 14 hours of daily power cuts, Katmandu gets two hours of water every two or three days, and frequent fuel shortages force drivers to line up for a few liters of rationed gasoline and diesel.

The United Communist Party of Nepal Maoist, the party of former communist insurgents, emerged as the largest party in the last election but could find it difficult to maintain that position.

Leader Pushpa Kamal Dahal - who once vowed to turn Nepal into the next Switzerland - was prime minister from August 2008 to May 2009, but faces a backlash.

"He has totally ignored us since he was elected. We elected him hoping that he would do something for the country but he failed us. He promised a developed Nepal but in reality the situation has become worse in the past five years," said Tirtan Pradhan, a school teacher.

Dahal led his rebels during the 10-year war that killed more than 13,000 people before joining the peace process in 2006.

Other parties hoping to emerge as a force in the election are the Nepali Congress, which trailed the Maoists in the last polls, and the Rastriya Prajatantra Party Nepal, which wants to revive a Hindu nation and bring back the monarchy.