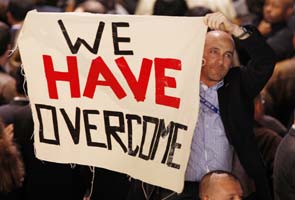 Washington: Chanting "Four more years!" and "USA, USA!," a crowd of several thousand well-wishers danced and waved flags outside the White House late Tuesday after Barack Obama was swept back into office.

Crowds braved the chilly autumn weather as they rushed towards the president's official residence, whooping and crying out "Obama, Obama!," and giving high-fives to complete strangers.

Union activist Nicole Arow, 28, said she was "thrilled and relieved" to learn about the Democratic incumbent's victory over Republican rival Mitt Romney, adding: "Joy. That's what I feel."

Downtown Washington, usually deserted at midnight on a weekday, was teeming with cars, drivers honking their horns in celebration and waving US flags out the windows.

Those who arrived at the White House shortly after US television networks called the race for Obama appeared to be mainly college students, but the party quickly grew to include middle-aged people and parents with young children.

Hope Cordova, 46, was one of the few who remembered to bring a campaign sign -- in her case, a plastic blue-and-white Obama-Biden 2012 yard sign.

"It takes more than four years to turn the country around. We want to give him four more years to complete his job," said Cordova, 46, a California real estate agent who was visiting a Washington-based friend.

Overcome by enthusiasm, a rowdy group borrowed her sign to wave outside the White House gates. The group jumped in unison as friends took pictures and amateur video with the iconic building in the background. TV reporters filmed the scene, shining bright lights on the group that added to their delirium.

"I'm incredibly excited," gushed Justin Pinn, a 22-year-old government student at Georgetown University. "I feel that my hope is renewed and I'm ready to fight the good fight. It's a great day to be an American!" he said.

The outpouring of enthusiasm was reminiscent of the spontaneous celebrations that broke out in Washington immediately after Obama won the 2008 presidential election over Republican Senator John McCain.

Crowds had also gathered outside the White House to celebrate in May 2011 when Obama announced the death of Osama bin Laden.
Comments
US Election