Royal palaces and residences have been closed since the death of the queen on September 8, including Windsor, west of London, where she spent much of her time. 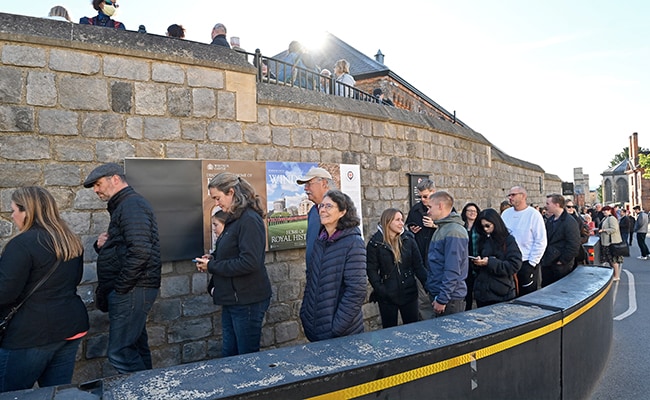 Members of the public and tourists queue to visit Windsor Castle in West London.

Hundreds of people lined up on Thursday outside Windsor Castle, as the landmark royal residence and its historic St George's Chapel, where Queen Elizabeth II was buried last week, re-opened following her death.

Long queues of tourists, many with advanced tickets, stretched back along the narrow streets outside the castle's stately walls for a chance to visit.

Royal palaces and residences have been closed since the death of the queen on September 8, including Windsor, west of London, where she spent much of her time.

The queen, who was 96, was laid to rest on September 19 after a grand state funeral in London and a committal service at St George's.

Her coffin was transferred to the adjoining King George VI Memorial Chapel, alongside her father, King George VI, and her mother, also called Elizabeth.

The queen's husband Prince Philip, who died last year, is also interred there, as are the ashes of her younger sister, Princess Margaret.

A new black marker stone has been laid into the floor recording the birth and death dates of the family.

Elizabeth II was Britain's longest-serving monarch in history, spending 70 years on the throne.

The small chapel annexe was commissioned by her father and completed in 1969. Elizabeth often prayed at St George's Chapel, which dates back more than 500 years.