Couple Left Waiting For Marriage Certificate Amid US Government Shutdown

Dan Pollock and his wife were politely turned us from the DC marriage bureau and told there would be no licenses until the government reopens. 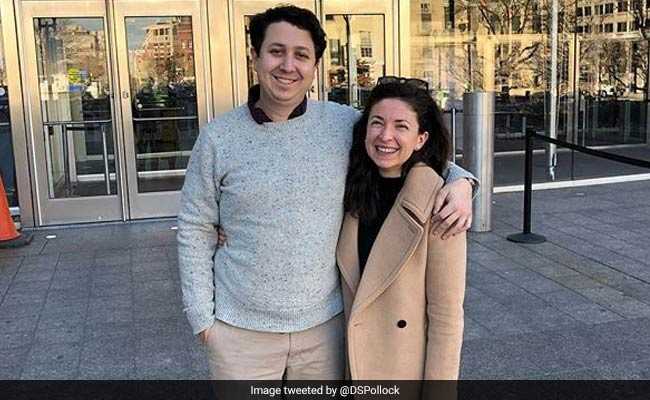 The couple posted their story on Twitter to show the real impact that the shutdown.

When Dan Pollock and his bride arrived at the marriage bureau in the US capital Washington to pick up their marriage certificate, they were surprised to find it was closed because of the government shutdown.

"It never occurred to us that the DC marriage bureau was federally funded," said Pollock, who, like his wife, is a former Senate staffer who had worked through previous government shutdowns.

"When we showed up at the courthouse, they politely turned us away and said there would be no licenses until the government reopens," Pollock told AFP.

With just two days until their wedding, however, it was too late to change their plans.

"We chose to embrace the insanity," said Pollock. "The entire wedding was a blast nonetheless, and I guess we'll be back in DC to make it official."

The couple, who posted their story on Twitter to show the real impact that the shutdown -- sparked by President Donald Trump's demand for funding for a wall on the Mexico border -- was having on ordinary people.

The government has been closed since before Christmas, and the leadership of the newly installed Democrat majority in the House of Representatives are refusing to yield to the president's demand for $5.6 billion for a wall, a key campaign pledge that he had originally said Mexico would pay for.

Trump has refused to sign off on a slew of government funding bills until he receives money for his "beautiful" southern border wall, leading to a government closure that has left hundreds of thousands of federal employees without pay over the holiday season.

The District of Colombia, where the nation's capital is located, receives part of its funding from the federal government, and has seen some city services directly impacted by the closure.

That includes the marriage bureau, which issues licenses for civil unions and certificates needed for other types of unions.

With neither side showing any sign of blinking, many couples are starting to worry they will not be able to officially tie the knot.

"But, man, I would still like the paperwork to be done," she told WTOP radio.

Washington mayor Muriel Bowser, aware of the stakes for constituents waiting to walk down the aisle, has announced extraordinary measures to issue marriage licenses despite the shutdown.

"Mayor Bowser will put forth emergency legislation to establish the authority to issue marriage licenses during a shutdown," said her spokesman John Falcicchio.

In the meantime, Democratic Senator Richard Blumenthal, for whom Pollock and his wife worked, paid homage on social media Thursday to the "beautiful couple."

"Like rain on your wedding day, maybe shutdowns are good luck," he said.

As for other soon-to-weds, wedding planner agency Howerton Wooten has some advice: "Get some wedding insurance," "Determine a plan B," and finally, "Don't panic. Government shutdowns are public relations nightmares for politicians, so they typically work hard to find a solution within days."