Could Pandas Get Caught In Trade War?

By prior agreement with the Chinese, all giant panda cubs born in U.S. zoos must be sent to a breeding program in China once they turn 4. 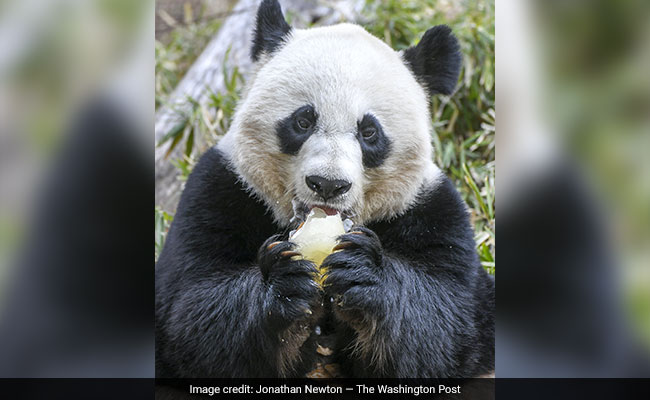 Mei Xiang is one of two adult giant pandas at the National Zoo on loan from China.

As the U.S.-China trade war worsens and President Donald Trump rails about economic theft, the United States has a precious commodity on loan from the Chinese less than three miles from the White House.

The National Zoo's beloved black-and-white bears, which have delighted Washingtonians for generations and have created joyous episodes of pandamania and profit, have been leased from China since 2000.

The zoo's only other giant panda, Bei Bei, who turned 4 on Aug. 22, is slated to be gone within the next few months.

By prior agreement with the Chinese, all giant panda cubs born in U.S. zoos must be sent to a breeding program in China once they turn 4.

Two of the zoo's cubs have been shipped to China in recent years, and plans for the transfer of Bei Bei are well underway, the zoo says.

The future of the adults, who are present under different terms from their offspring, is not clear.

The zoo said it has not started those discussions with the Chinese and could not speculate on an outcome. And the U.S. political landscape by late 2020 is a mystery.

The National Zoo is hopeful that China would not leave Washington pandaless and has said that collaboration with Chinese scientists on giant pandas has been highly beneficial for both counties.

"Our agreements are based on science surrounding the giant pandas," zoo spokeswoman Pamela Baker-Masson said. "We've accomplished a lot over last 40-plus years. Now both sides have to take look at what the future science goals should be and theygo from there."

Chinese and American giant panda experts get on "exceptionally well," she said.

Should giant pandas be caught up in Chinese-American affairs, it would not be the first time.

Milestones in the pandas' tenure in Washington have been celebrated by top officials from both countries.

In 2015, then-first lady Michelle Obama joined the first lady of China, Peng Liyuan, at the zoo for the official announcement of Bei Bei's name.

But panda diplomacy was really born years before.

In February 1972, at a dinner in Beijing, first lady Patricia Nixon told Chinese Premier Zhou Enlai how fond she was of giant pandas, the zoo says on its website.

Eager for improved relations with the United States, the zoo says, Zhou replied: "I'll give you some."

The visit by President Richard Nixon and his wife had made worldwide headlines. The United States and Communist China had been bitter geopolitical foes for 20 years. And the offer of the pandas was part of a historic thaw in relations.

That April, China gave the United States two young giant pandas, Ling-Ling, a female, and Hsing-Hsing, a male. Both were 18-months-old.

They were a gift, not a loan, the zoo notes, and "ever since their arrival, the pandas have symbolized cross-cultural collaboration between the United States and China."

In return, the United States sent China two musk oxen, Milton and Matilda, from the San Francisco Zoo. Musk oxen are shaggy natives of the Arctic known for their strong odor.

Zoos in or near several cities - San Diego, Chicago, St. Louis and New York - had lobbied to get the Chinese pandas, but Nixon chose Washington.

Nixon reportedly disclosed his choice in a telephone call to the old Washington Star newspaper, which had lobbied for the National Zoo.

The pandas arrived that April, to be greeted by Patricia Nixon and delirious throngs.

The bears were a delight for more than two decades, drawing tens of thousands of visitors, and putting the animal on a par with cherry blossoms as a symbol of Washington.

Ling-Ling died in 1992, and Hsing-Hsing died in 1999, leaving the zoo's giant panda house empty for the first time in 27 years. The pair had several cubs but none survived.

And in 2015, another agreement was reached to keep the giant pandas in Washington until next year.

Meanwhile, the zoo has been waiting to see if Mei Xiang is pregnant.

The Panda House closed Aug. 7, anticipating that shemight be with cub.

Zoo experts said Mei Xiang, 21, started to show changes in her behavior earlier this month that might be a sign she's pregnant - or having a false pregnancy, which is relatively common in pandas.

This year, her levels of progesterone were rising, and she remained indoors, both signs of possible pregnancy.

It's tricky to get a giant panda pregnant. The animals are in estrus for only 24 to 72 hours each year.

Typically when a female giant panda is pregnant, she will spend more time sleeping and less time eating. Pregnant pandas also become more sensitive to noise, which is why officials decided to close the Panda House.

Mei Xiang is also licking her paws and cradling toys - two more signs she could be pregnant. And officials said she has "also started building a small nest of shredded bamboo in her den" and adds to it at night.

Zookeepers have been doing regular ultrasounds on Mei Xiang for the past month. She is on the older side for giving birth, but officials said there are giant pandas that have successfully given birth when they were older than she is.

The animals are listed as "vulnerable" by the International Union for Conservation of Nature, the zoo said. There are believed to be about 1,800 in the wild and about 500 in captivity worldwide.