Who are these protesters and what caused the outrage? And could the demonstrations, which have degenerated into violence, endanger the rule of President Aleksandar Vucic, who critics accuse of growing authoritarianism? 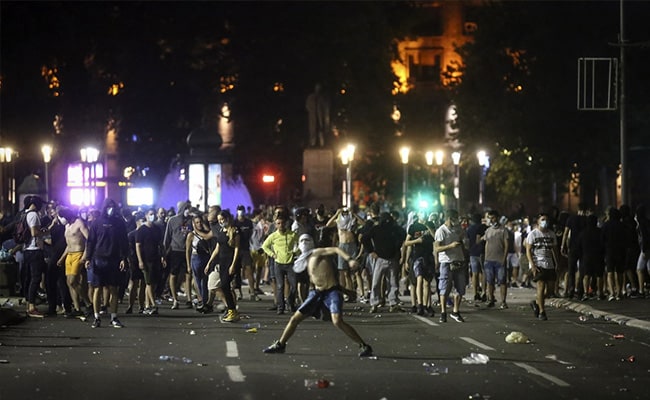 Frustration has been building up over Serbia's rollercoaster response to the coronavirus outbreak.

For many Serbs, it was the last straw: when the president announced the resumption of a weekend curfew to fight the coronavirus pandemic, thousands took to the streets in anger.

Who are these protesters and what caused the outrage? And could the demonstrations, which have degenerated into violence, endanger the rule of President Aleksandar Vucic, who critics accuse of growing authoritarianism?

Why are people protesting?

Frustration has been building up over Serbia's rollercoaster response to the coronavirus outbreak.

After initially playing down the dangers, authorities swung from ultra-tight lockdowns to a speedy return to normal last month ahead of national elections that cemented Vucic's grip on power.

Critics blame Vucic for a second wave of infections, which shot up after the June 21 vote.

"Our government is simply looking after its own interest, the people are just collateral damage, said Jelina Jankovic, a protester.

Serbia has reported some 370 fatalities but many accuse authorities of fudging the figures, which the government denies.

On Tuesday, Vucic announced the return of a round-the-clock weekend curfew to combat the second surge.

"We relaxed too much, made many errors, and that is an individual blame on all of us", he said. 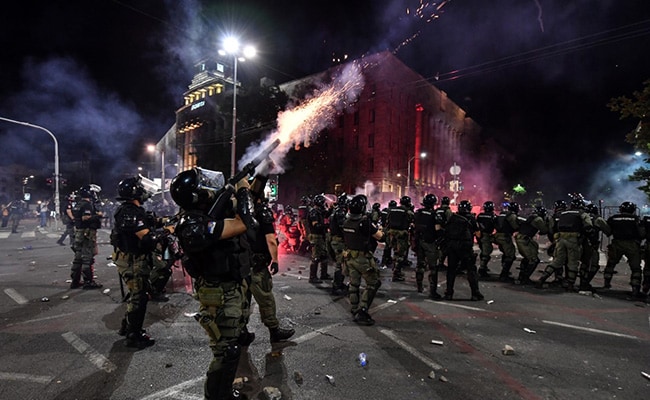 Protesters outraged by the finger-pointing then flooded into the centre of the capital the same evening.

While the government backtracked on the curfew, the protests have continued against a leader accused of trampling on Serbia's democratic institutions.

The demonstrations have not been led by any particular party, with groups spanning from the left to the far-right.

There are young people and families as well as groups holding religious icons and flags of Serbia's former province Kosovo.

On the first day of protests Tuesday, a far-right group leading the frontline broke into parliament, setting off clashes with the police with tear gar being fired.

Most nights start out peacefully before bands of protesters begin hurling stones, flares and firecrackers at police officers.

On Thursday, some demonstrators sat down in front of parliament to show they came in peace. Many of them accuse the state of planting 'agents provocateurs' to discredit them.

"I am always in favour of peaceful demonstrations because violence breeds violence and that is not why we came," said 30-year-old Tijana Milojevic.

Analysts say these divisions could affect the movement.

"If no political leadership is identified the protests will probably die off," as they could be hijacked by the far-right, leading to a loss of popular support, or spawn several clashing factions, said Bosko Tripkovic, a law professor at the University of Birmingham.

Is Vucic under threat?

From prime minister to president, Vucic has been steadily increasing his powers for the past eight years.

This has been accompanied by sweeping control over the media with many television channels and tabloids serving as propaganda outlets, according to US-based Freedom House, which no longer considers Serbia a democracy.

The national broadcaster RTS ignored the first night of protests and aired a Jackie Chan film.

"Previous protests in Serbia have shown that the government can tolerate several months of peaceful demonstrations by several thousand people -- as long as it controls the media narrative," said Rujevic.

For the moment, the crowd is not big enough to worry the president, said Florian Bieber said, a Balkan expert from the University of Graz.

"With the opposition being divided, it cannot become a serious threat to the government," Bieber said.

- How has the state responded?

Scenes of police brutality captured on television have gone viral, including an incident Tuesday in which officers used batons to beat three men sitting peacefully on a bench.

Yet the Serbian ombudsman has claimed that "no excessive force was used" to quell the protests.

Vucic has branded the protesters "criminal hooligans" and made vague accusations of "foreign meddling".