From Gin To Disinfectants, Distillery Changes Business To Fight Virus

The Belgian government said on Friday it would provide 1 billion euros ($1.1 billion) urgently to help hospitals face the crisis, with 2,257 cases confirmed so far and 37 deaths recorded. 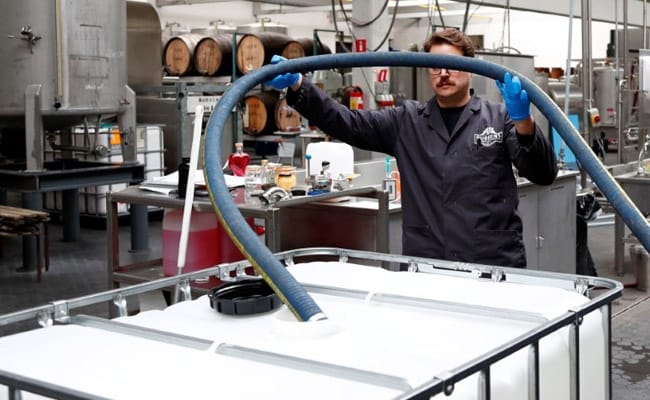 Rubbens distillery decided to produce a disinfectant liquid for hands and surfaces. (Reuters)

A Belgian distillery has switched from producing gin to disinfectants after medical authorities sought additional supplies to cope with coronavirus spreading in the country.

The Belgian government said on Friday it would provide 1 billion euros ($1.1 billion) urgently to help hospitals face the crisis, with 2,257 cases confirmed so far and 37 deaths recorded.

In the town of Wichelen, the Rubbens distillery decided to play its part: it started treating the alcohol that normally goes into gin and genever - a juniper-flavored liquor - with ether, producing a disinfectant liquid for hands and surfaces.

"Hospitals started calling us to ask if we had alcohol," said the company's manager, Hendrik Beck.

"Last week, we were bottling gin.Now, we're filling up disinfectant alcohol It's pretty unreal for us, but we are happy to help out people."

Rubbens normally produces around 4,000 liters (1,057 gallons) of liquors a day - now, it's 10,000 liters of the disinfectant instead. As the country went into a lockdown to try contain the disease, Beck said the distillery was among the many businesses hit, and selling the newly made liquid went only some way to offset the damage.

"Our company is suffering economic losses - our bar and restaurant are closed, and our clients are also affected a lot," he said.

"We can compensate for this a bit now, but we wouldn't want anything else but for everything to go back to normal."

The Belgians are not alone, LVMH, the conglomerate behind Louis Vuitton, has said perfume factories in France, which normally turn out fragrances and cosmetics for Christian Dior, Guerlain and Givenchy, would start producing sanitizer gel to be distributed free to hospitals and health workers.