Woman Meets Baby She Gave Birth To In COVID-19 Coma

Yanira Soriano, 36, was intubated for 11 days in an intensive care unit before recovering "miraculously" to welcome her fourth child, her doctor told AFP. 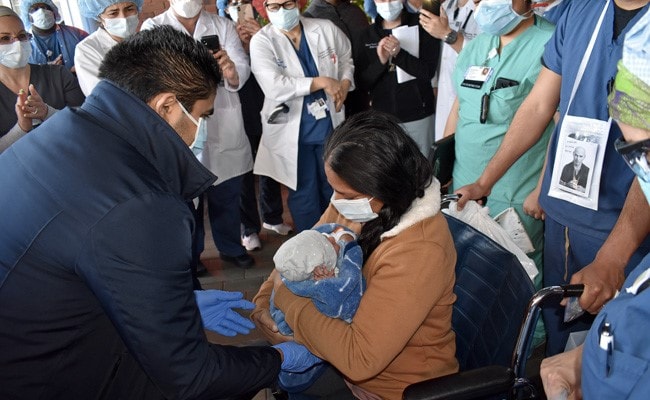 A woman in New York has met for the first time the baby she gave birth to in early April while she was on a ventilator in an artificial coma because she had a serious form of COVID-19.

Yanira Soriano, 36, was intubated for 11 days in an intensive care unit before recovering "miraculously" to welcome her fourth child, her doctor told AFP.

"We really did not know if she was going to survive at all," said Benjamin Schwartz, head of obstetrics and gynecology at Southside Hospital in Bay Shore. "Most patients on a ventilator don't survive."

But she finally turned a corner and was released from hospital in a wheelchair to the applause of dozens of health care workers on Wednesday. Her husband, who wore a mask like everyone else there, gently handed her their baby boy, Walter.

Soriano was eight months pregnant when she became infected, around the same time as her husband, who had a less serious case and was able to remain at home.

She was hospitalized and placed on oxygen but her condition quickly deteriorated.

Doctors feared that a lack of oxygen might put the baby in danger, but also that the pressure from her large belly might prevent her lungs from functioning well.

They just had time to tell her they wanted to perform an emergency cesarean section before she was placed in an artificial coma -- with Soriano urging them to do whatever it took to save her baby.

"The mother knew that that was happening, but then got really bad right before the section was performed and ended up on a ventilator, and not being awake to the birth of a child," said Schwartz.

The baby, who was only slightly premature, is doing well. He was transferred to a children's hospital in New York, where he was picked up by his father on Tuesday.

In some rare instances, babies born to mothers with COVID-19 tested positive themselves when they were checked shortly after birth -- but this was not the case for little Walter, whose test came out clear.

The pandemic has extracted an especially heavy toll in New York, where more than 11,000 have died statewide.

The prognosis for patients who need to go on ventilators because their lungs are failing is poor, with only around 20 percent surviving the ordeal, according to the state's governor.