Coronavirus: Myanmar has been in turmoil since the military took power in February, with many hospitals ill-equipped to cope with a surging caseload. 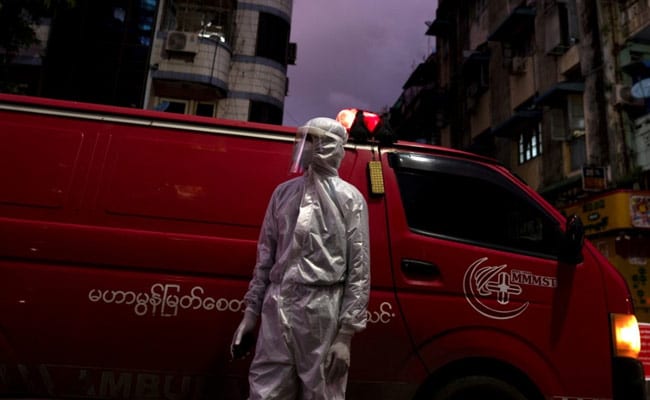 Coronavirus: Health worker stands near an ambulance, amid COVID-19 outbreak in Myanmar.

Junta authorities in Myanmar are seeking help from the international community to tackle the coronavirus, state media said Wednesday, as the impoverished country looks beyond ally China in its struggle to beat back a new wave.

The nation has been in turmoil since the military took power in February, with many hospitals ill-equipped to cope with a surging caseload after many medical staff walked out in protest at the coup.

Stay-at-home orders affecting millions have failed to halt the surge, with crematoriums working at capacity and volunteers working to bring out the bodies of people who have died in their homes.

Junta leader Min Aung Hlaing told a "coordination meeting to beef up cooperation with the international community" that Myanmar should seek money from a Covid-19 response fund set up by the Association of Southeast Asian Nations.

Efforts were being made to work with ASEAN "and friendly countries", the Global New Light of Myanmar newspaper reported, without giving details.

Just under 5,000 new cases of Covid-19 were reported Wednesday -- up from around 50 per day in early May -- but analysts say the real count is likely much higher.

Around 1.75 million people have so far been vaccinated according to the State Administration Council -- as the junta dubs itself -- out of a population of 54 million.

Last week a batch of donated Sinopharm doses arrived from China, junta authorities said, but they would be prioritised for those living along the China-Myanmar border.

China has also supplied more than 10,000 shots to a rebel group operating near its southern frontier in Myanmar, as Beijing seeks to halt an influx of cases from the coup-wracked country.

The junta has ordered a total of four million vaccine doses from China, it said earlier this month, and Beijing will donate a further two million.

A shipment of 1.5 million doses also arrived from India earlier this year.