COVID-19: An official tally on Monday showed that Saint Petersburg had reported 110 fatalities over the past 24 hours, while Moscow reported 124. 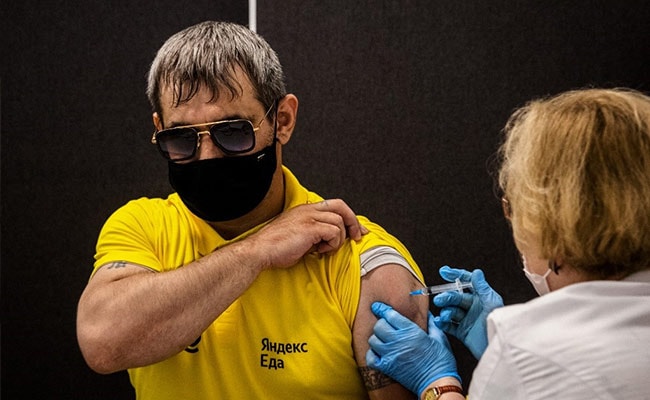 COVID-19: Russia has vaccinated just 21.2 million with at least one dose of COVID vaccine as of Monday.

The new records come as second city Saint Petersburg is set to host a Euro 2020 quarter-final on Friday, with organisers maintaining the match will go ahead as planned.

An official tally Monday showed that Saint Petersburg had reported 110 coronavirus fatalities over the past 24 hours, while Moscow reported 124 -- topping records both cities had set over the weekend.

Nationwide infections grew by 21,650, bringing Russia's caseload to nearly 5.5 million -- the fifth highest worldwide, according to an AFP tally.

Moscow Mayor Sergei Sobyanin said Monday that over the past week the city had also broken new records for hospitalisation numbers and people in intensive care units.

"The situation with coronavirus in Moscow remains extremely difficult," he was quoted by news agency Interfax as saying.

Sobyanin, who has said that the highly infectious Delta variant first identified in India represents 90 per cent of new cases, has rushed to introduce new restrictions to counter the new wave after life in the city had for months all but returned to normal.

The mayor ordered businesses to send home 30 per cent of non-vaccinated employees and restaurants to allow inside only patrons who have been inoculated or infected in the previous six months.

Olga Dombak, the only customer at a restaurant in central Moscow on Monday afternoon, said getting her anti-Covid pass was "very easy".

"Those who have been vaccinated, who care about their health and the health of others, can live a full life," the 31-year-old engineer told AFP.

Saint Petersburg, meanwhile, has tightened some restrictions, including banning food sales at its Euro 2020 fan zones.

But authorities on Friday allowed high school graduation celebrations to go ahead including a packed concert that drew thousands in the city centre.

The city has hosted six Euro 2020 matches and is due to host a quarter-final on Friday, with spectator numbers capped at half but still upwards of 26,000 people.

On Monday, a UEFA spokesperson told AFP that the surging outbreak "changes absolutely nothing".

Russia's latest coronavirus surge has been worsened by a slow inoculation drive.

Despite free jabs having been available since December, as of Monday just 21.2 million out of a population of about 146 million had received at least one dose of a vaccine, according to the Gogov website, which tallies Covid figures from the regions and the media.

To counter a population sceptical of vaccines -- a recent poll showed that 60 per cent of Russians did not plan on getting inoculated -- Sobyanin earlier this month ordered mandatory jabs for service sector employees.

At least 16 of Russia's 85 regions had followed suit by Monday, and Kremlin spokesman Dmitry Peskov told journalists that authorities have seen demand for vaccines increase.

With 133,893 deaths from the virus, Russia has the highest toll from COVID-19 in Europe -- even as authorities have been accused of downplaying the severity of the country's outbreak.

Under a broader definition for deaths linked to coronavirus, statistics agency Rosstat at the end of April said that Russia has seen at least 270,000 fatalities since the pandemic began.