Watch: Macron, Merkel Switch To Namaste In The Time Of Covid

US President Donald Trump and Israel Prime Minister Benjamin are among some of the world leaders who have adopted the Indian style of greeting. 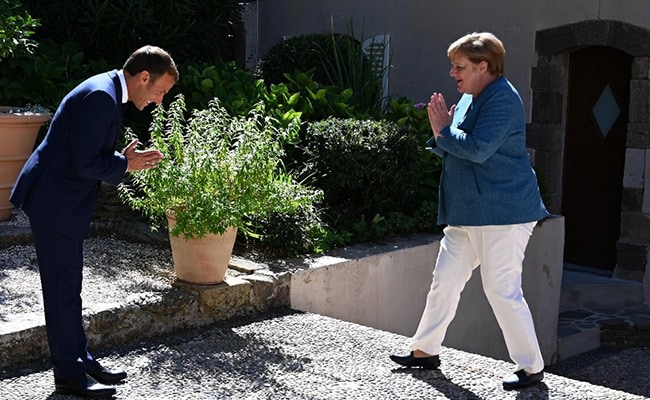 Emmanuel Macron switched to namaste to welcome Angela Merkel as she arrived at Fort de Bregancon.

French president Emmanuel Macron leaned forward and folded his hands in the traditional Indian "namaste" as he welcomed German Chancellor Angela Merkel at his Mediterranean holiday retreat, the Fort of Bregancon, in southern France.

The German Chancellor reciprocated with what is becoming a popular form of greeting among world leaders in the time of the coronavirus pandemic. The two leaders are meeting at the French President's summer residence to discuss a long list of subjects including the pandemic, post-election unrest in Belarus and growing tensions with Turkey.

US President Donald Trump and Israel Prime Minister Benjamin Netanyahu are among world leaders who have chosen a "Namaste" over the usual handshake in keeping with social distancing restrictions to avoid infection.

The Israel Prime Minister was one of the first global leaders to endorse the Indian-style greeting. "Just avoid shaking hands as I do. You can try to implement the Indian system of Namaste or say another word like shalom, but find a way, any way of not shaking hands," Mr Netanyahu had said.

In March, Donald Trump was also pictured greeting visiting Irish Prime Minister Leo Varadkar with folded hands. "We did not shake hands today. We looked at each other and said what we are going to do. You know, sort of a weird feeling," Trump told reporters after his meeting with Mr Varadkar, who is of Indian-origin. 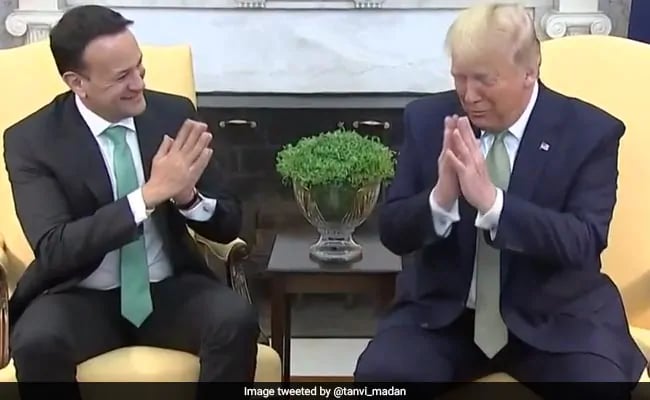 Donald Trump and Leo Varadkar joined their palms in the ''namaste'' pose as they greeted each other.

A video of Prince Charles, 71, greeting people with a "Namaste" in London had gone viral on social media in March.

Prime Minister Narendra Modi referred to the trend while addressing the India Global Week 2020. "You would have seen Namaste has gone global as a form of greeting. The pandemic has also seen the universal appeal of yoga, Ayurveda and traditional medicine world over. India's ancient culture and universal peaceful ethos are its strength," he was quoted saying at the event.

The novel coronavirus spreads through contact with droplets spread during coughing and sneezing, doctors say. Besides keeping contact to a minimum with an infected person, the preventive measures include frequent washing of hands and use of hand sanitisers.