Days after it triggered concern in India, the European Union's decision to exclude Covishield from a list of approved Covid vaccines for a 'passport' - to allow EU and non-EU citizens restriction-free travel within the bloc - has set alarm bells ringing in Africa.

The Africa CDC (Africa Centres for Disease Control and Prevention) has expressed concern over the inequitable treatment of people vaccinated with Covishield - the AstraZeneca-Oxford University vaccine made in India by the Serum Institute and distributed to African nations as part of the COVAX initiative.

"... guidelines put at risk the equitable treatment of persons having received vaccines in countries profiting from the EU-supported COVAX Facility, including the majority of the African Union (AU) Member States," the Africa CDC said.

"Under such regulations, persons who received Covishield, despite being able to demonstrate proof of vaccination, would continue to be subject to restrictions, including limitations of movement and testing requirements, with considerable administrative and financial implications," it added. 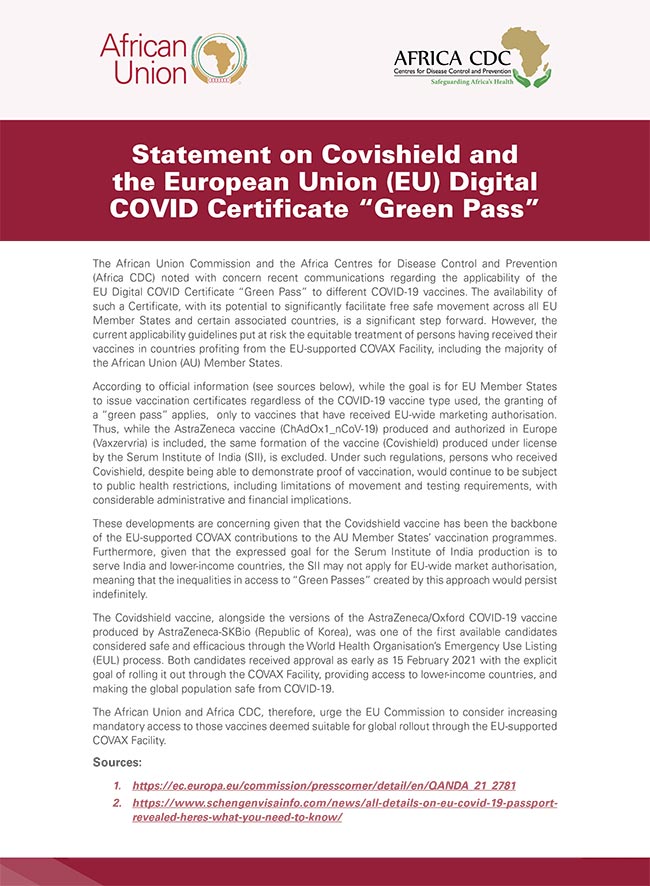 Covishield has been excluded from the European Medicines Agency's list of approved vaccines despite the EU-produced version - Vaxzervria - being included.

It has also been excluded despite holding an EUL, or emergency use listing, from the World Health Organization; the EUL was granted in February and it is one of only seven vaccines on that list.

This means people vaccinated with Covishield (or Covaxin, in the case of Indians) are not eligible for restriction-free EU travel; they will be subject to quarantine protocols as enforced by individual member countries, and may even be blocked from entering some others.

The EU, which plans to introduce the 'vaccine passport', or 'digital Covid certificate', on July 1 does, however, also say that "member states may decide to extend this (issuing of the certificate) ... to travellers that received another vaccine", which includes those approved by the WHO.

Over 28 crore doses of Covishield have been administered in India, with crores more exported to Africa under COVAX - a worldwide initiative supported by the European Union and the WHO, and which is aimed at providing poor countries with equitable access to COVID-19 vaccines.

Serum Institute CEO Adar Poonawalla on Monday said he was "taking this up at the highest levels... with regulators and diplomats" and that he "hoped to resolve this matter soon".

The Serum Institute - which worked with COVAX to export Covishield to over a dozen countries in Africa and Asia in March and April - has also asked the Indian government for help.

Sources quoted by news agency PTI said Mr Poonawalla has written to External Affairs Minister S Jaishankar to say: "... this will affect students, business travellers back and forth, and cause severe disruptions to our economy and to the global economy."

However, on Tuesday afternoon the EMA told NDTV it had not received a request for approval as yet.

The EMA said minor differences in manufacturing processes could result in differences in the final product, and EU law required assessments as part of the authorisation process.

The Indian government has said it is opposed to the idea of a 'vaccine passport'; at a meeting of health ministers from G7 countries (to which India was invited) Union Health Minister Dr Harsh Vardhan expressed "India's concern and strong opposition to 'vaccine passport' at this juncture".

With vaccine coverage as a % of population in developing countries still low compared to developed countries, such an initiative could prove to be highly discriminatory.@G7pic.twitter.com/zh6nhkEfbv

In April the WHO - at a meeting of an emergency committee regarding COVID-19 - urged nations against requiring proof of vaccination as a condition of entry.

The global health body said: "... given persistent inequity in global vaccine distribution... States are strongly encouraged to acknowledge... proof of vaccination (as) deepening inequities and promoting differential freedom of movement."