COVID-19: In Brazil's large cities, life seems almost back to normal with restaurants and shops open and many on the streets not wearing face masks. 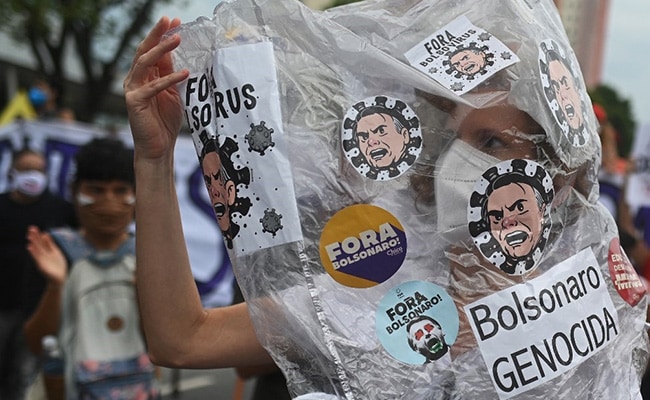 COVID-19: On Saturday, thousands of Brazilians took to the streets in protest against President Bolsonaro

Brazil on Saturday became the second country after the United States to surpass 500,000 COVID-19 deaths as the South American giant grapples with a third wave of the pandemic.

"500,000 lives lost due to the pandemic that affects our Brazil and the world," Health Minister Marcelo Queiroga tweeted.

The Health Ministry reported 500,800 deaths, including 2,301 in the last 24 hours, a toll that many epidemiologists say is an undercount.

This week, the average number of daily deaths surpassed 2,000 for the first time since May 10.

"The third wave is arriving, there's already in a change in the case and death curves," Ethel Maciel, an epidemiologist from Espirito Santo University, told AFP.

"Our vaccination (program), which could make a difference, is slow and there are no signs of restrictive measures, quite the contrary."

In large cities, life seems almost back to normal with restaurants, bars and shops open and many people in the streets not wearing face masks.

And yet the situation is critical in 19 of Brazil's 27 states with more than 80 per cent occupancy of intensive care beds -- in nine of those states it's over 90 per cent.

The "second wave", from January to April this year, was particularly deadly.

The number of deaths increased exponentially with the arrival of the Gamma virus variant that originated in Manaus, in the north of Brazil.

It gradually began to fall in May, thanks in part to the closure of businesses when the pandemic was at its worst.

But many epidemiologists believe the lockdown restrictions were lifted too soon at a time when daily deaths were still up around the 2,000-mark.

Contrary to what has been seen in Europe, there's been no real trough between the different waves in Brazil.

"I don't know if it's a third wave... it seems we never got out of the first one," said Alexandre da Silva, a specialist in public health at the University of Sao Paulo.

"It seems the pandemic has now turned into a marathon runner who is pacing his race. It's not a sprinter who does his sprint but then loses power."

Brazil has recently received several batches of vaccines, including from US pharmaceutical giant Pfizer, but the country has only managed to fully vaccinate 11 per cent of the population, with 29 per cent receiving one dose.

The vaccination drive began late in mid-January using the AstraZeneca and Coronavac jabs.

Far-right President Jair Bolsonaro, who previously hit out at vaccines, has promised to immunise the entire population by the end of the year -- something specialists consider unlikely.

Bolsonaro has been criticized for downplaying the pandemic from the outset, opposing lockdown measures and plugging unproven medical treatments for Covid, and on Saturday thousands of Brazilians again took to the streets in protest against him.

In rallies in Rio de Janeiro, Brasilia and elsewhere, people carried banners with slogans like "Bolsonaro must go."

"His position on Covid and his denialism are absurd. He has abandoned reality and common sense. There is no explaining this, it is surreal," said Robert Almeida, a 50-year-old photographer marching in Rio.

It was all the more surprising, then, that Brazil agreed at the 11th hour to host the Copa America football tournament, seeing global stars such as Argentina's Lionel Messia, Luis Suarez of Uruguay and the hosts' own Neymar arrive from their European clubs.

The matches are being played behind closed doors but Bolsonaro has come under fire for giving his blessing to host the tournament in the midst of a pandemic when both Argentina and Colombia had to pull out.

Many Brazilians have voiced their opposition to the tournament.

"It doesn't make any sense, it defies logic, for the same reason Argentina didn't want to host the Copa America, since the number of cases is increasing," said Maciel.

"It makes no sense for Brazil, in a worse situation than Argentina, to be hosts."

Beyond the football tournament, Maciel says the government's pandemic management is responsible for thousands of extra deaths.

"If we had acted in a different and coordinated way, giving concrete information to the people on public health measures... none of this would have happened," she said.

She accused the government of "confusing the people" by advising against health measures backed by science, such as social distancing and the use of face masks.

Bolsonaro shows no signs of changing tack, though, and last week announced he would ask the health minister to lift the requirement to wear masks outdoors.

He has already been hit with several fines by local authorities for holding rallies without wearing a mask.

And Bolsonaro is also under investigation by the Senate over his chaotic pandemic management.