Coronavirus: The 10-year-old appeared healthy and was only diagnosed with the virus after his parents insisted he too was tested, his doctors said, adding that he "was shedding virus without symptoms." 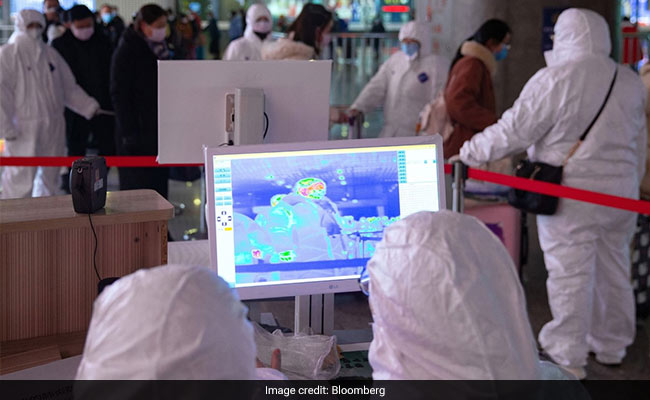 Coronavirus: Doctors are rushing to try to develop a vaccine or treatments that could prevent its spread

The case of a 10-year-old boy who was diagnosed with the Wuhan coronavirus even though he showed no symptoms is raising concern that people may be spreading the virus undetected by the front-line screening methods implemented to contain the epidemic.

The boy was part of a family who visited relatives in the central Chinese city over the New Year. While his parents and grandparents fell ill and were treated after they returned to their hometown, the 10-year-old appeared healthy and was only diagnosed with the virus after his parents insisted he too was tested, his doctors said, adding that he "was shedding virus without symptoms."

"You may have mild disease spreaders that would be feeding sort of a community outbreak and they don't go to hospital because they don't feel that bad," said Ralph Baric, professor of microbiology and immunology at the Gillings School of Global Public Health at the University of North Carolina at Chapel Hill, who has studied coronaviruses for decades and warned about their threat before the 2003 SARS outbreak.

The boy's case, published Jan. 24 in the Lancet medical journal, was the first to demonstrate person-to-person and health-care associated spread of the newly identified virus, dubbed 2019-nCoV. The asymptomatic infection has fueled concern the pathogen, which has already spread to 15 countries and infected close to 6,000 people, may turn out to be harder to detect and contain than SARS, the similar pneumonia-like illness that erupted into a global epidemic.

While both the boy's parents were infected, each had a normal body temperature when they sought treatment. Later, the virus spread to a sixth relative who hadn't traveled.

Similar patterns are appearing outside China. Four cases in Germany were linked to a company training event that was attended by a colleague visiting from China who had no symptoms of disease during her stay.

"These cryptic cases of walking pneumonia might serve as a possible source to propagate the outbreak," Kwok-Yung Yuen and colleagues the University of Hong Kong, said in the Lancet paper.

The boy's family flew from their home in Shenzhen, a city in the south of the country next to Hong Kong, to Wuhan on Dec. 29 to visit relatives, including one who was in a hospital. Two days after they arrived, the Health Commission of Hubei province announced that a group of 27 people in the city had unexplained cases of pneumonia, a statement that received little notice outside of the city at the time.

Within three to five days in Wuhan, four family members gradually developed symptoms such as fever, cough, fatigue and diarrhea. On their return home, they were diagnosed with 2019-nCoV based on a viral analysis and lung scan.

The 10-year-old boy's lungs were also scanned "on the insistence by the nervous parents" and showed signs of infection, which was confirmed by swabs of the back of his nose and throat. That meant he was capable of transmitting the virus even though the kind of tests used in airport screening for the virus would not identify him as a carrier.

It was "a rather unexpected finding," Yuen and colleagues wrote. Yet it doesn't come as a complete surprise to doctors in China trying to unravel the means and ways the new virus is spreading.

"Children and infants' symptoms are comparatively mild, while older people have more severe symptoms, as of our findings so far," Feng Zijian, deputy director of the Chinese Center for Disease Control and Prevention, told reporters Wednesday.

"One of the worrying things is the walking pneumonia and especially the younger kids in whom you don't get as much of an immune reaction," said John Nicholls, a clinical professor of pathology at the University of Hong Kong and part of the research team that isolated and characterized the SARS virus.

As more cases of the new coronavirus appear around the world, doctors and medical research teams are rushing to try to develop a vaccine or treatments that could prevent its spread. But, as in the SARS outbreak, the most effective methods are thought to be in identifying and isolating patients soon after infection, and then tracing and isolating their potential contacts.

China has locked down Wuhan, a city of 11 million people, and imposed travel restrictions within China and to Hong Kong and Macau in an attempt to combat the epidemic. But evidence that children may be able to contract and spread the disease without showing acute symptoms may complicate those efforts.

"Public health controlled SARS because SARS let it," said Mark Denison, director of infectious diseases and and a pediatrics professor at the Vanderbilt University School of Medicine. That's unlike influenza, where a larger portion of patients transmit the virus while they are silently incubating the infection.

"So the question is, is this virus more SARS-like, or is it more flu-like?" Denison said. "The data suggests that it's somewhere in the middle: that it is a more mild disease, but that there may be more transmission."

--With assistance from Claire Chen and Tim Loh.