Jilmar Ramos-Gomez will receive $190,000 in a settlement with Grand Rapids after a police officer began a series of events that led to his detainment by ICE. 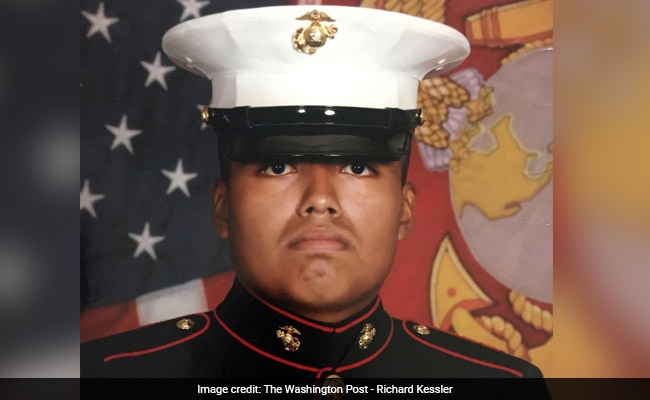 Jilmar Ramos-Gomez was arrested for trespassing in a secure area of a hospital.

Six years after his combat service in Afghanistan, Jilmar Ramos-Gomez sat in an immigrant detention center in Michigan, contemplating how a U.S. citizen and war veteran could get sucked into a Kafkaesque deportation void.

It started with an off-duty police captain watching the evening news featuring Ramos-Gomez's arrest, speculating if the veteran, Michigan born and bred, was in the country illegally.

Those suspicions triggered a decision by U.S. Immigration and Customs Enforcement to detain him for three days, despite immediate evidence that proved Ramos-Gomez was a citizen, including police reviewing his passport the day of his arrest.

Nearly a year later, the Grand Rapids city commission on Tuesday unanimously agreed to award Ramos-Gomez $190,000 in a settlement over the wrongful detainment, his family's attorney Richard Kessler told The Washington Post.

The city did not admit fault in the settlement. But the amount indicates "they know they did something wrong," Kessler said Thursday.

The incident was another thread in a national debate on whether police departments should work with federal immigration authorities. Advocates of sanctuary cities say doing so makes victims and witnesses fearful of cooperation with police.

Kessler and civil rights groups said authorities targeted Ramos-Gomez for his Latino origins and believe the circumstances surrounding his arrest stemmed from post-traumatic stress due to his service in Afghanistan. He served as a tank crewman there in 2013, earning a combat action ribbon.

"He fought on the battlefield and came back scarred. And instead of honoring him, ICE tried to deport him," Miriam Aukerman, the senior staff attorney for the American Civil Liberties Union of Michigan, told The Post.

Emails and texts between Grand Rapids police and ICE officials, obtained and published by the ACLU, reveal a barrage of miscues, miscommunication and avoidance of evidence that could have stopped ICE's involvement from the very beginning.

Ramos-Gomez, now 28, was arrested for trespassing in a secure area of a Spectrum Health Butterworth Hospital on Nov. 21. He set a fire and pulled an alarm.

He was not a patient at the hospital, Kessler said, but he was struggling with post-traumatic stress at the time and accessed a helipad on the roof.

Body-cam video shows police immediately knew he was a U.S. citizen. He had his passport with him during the arrest, and the video shows an officer holding it open while taking notes.

But that night, after police had already determined Ramos-Gomez was a citizen, his name and booking photo surfaced on local news.

Grand Rapids Police Capt. Curtis VanderKooi, off-duty at the time and not part of the investigation, took notice.

"Could you please check his status?" VanderKooi, the department's ICE liaison, wrote to an ICE officer in an email that evening, according to police documents.

Two days later, the officer responds to VanderKooi, saying he interviewed Ramos-Gomez and that "he is a foreign national illegally in the U.S."

Eight days after Ramos-Gomez's arrest, on Nov. 29, VanderKooi emailed the agent and police investigator Adam Baylis with an update, which included a police report that references a passport. VanderKooi's subject line included the word "loco," the Spanish word for crazy, in reference to Ramos-Gomez.

"I am confused. Didn't his property have a US Passport in it? And he was a veteran?!" Helmer wrote.

Ramos-Gomez was held at Kent County Jail until Dec. 14, when he was slated for release after pleading guilty to a misdemeanor trespassing charge, Kessler said. A judge ordered him released on his own recognizance. But he didn't go free. ICE agents led Ramos-Gomez away in shackles, Kessler said, beginning a three-day confinement in ICE custody.

"They very much admitted he was a U.S. citizen," he said. But the ordeal left the family outraged and Ramos-Gomez shaken.

"He said, 'I can't believe it, I was a Marine and this is how they treat me,'" Kessler said.

ICE later said Ramos-Gomez "claimed in verbal statements to be a foreign national illegally present in the U.S."

The agency declined to say why they did not consider other evidence to the contrary. Aukerman and Kessler dispute that admission even occurred.

City Attorney Anita Hitchcock said the settlement was not an admission of liability but "a resolution of a disputed claim."

VanderKooi served a 20-hour suspension for his conduct in the referral, the Associated Press reported. Sgt. John Wittkowski, a spokesman for the department, said he is the commander of investigations.

VanderKooi told investigators his initial reason for contacting ICE was a concern Ramos-Gomez's trespassing could have terrorism implications.

Aukerman and Kessler dismissed that as a retroactive defense, noting he focused his efforts with an agent that works on deportations rather than HSI, the agency's criminal investigations unit. Before VanderKooi got involved, an officer texted an FBI agent and described the arrest incident as "Vet, PTSD, But not a FBI issue."

There was no formal policy in communicating referrals with ICE at the time, Wittkowski said, when officers relied on back channels with agents.

A department policy enacted in August, in response to fallout from this and other incidents, allows checks on immigration status only in relevant investigations and when approved by the chief. The measure was added to "foster trust" between police and immigrant communities.

While Aukerman was heartened by the settlement, she said the incident revealed larger issues within the department and the very nature of how police work with federal immigration agents.

"ICE had lots of evidence he was a U.S. citizen, and they didn't bother to look at it," she said. "It shows a real callous disregard of rights of anyone who gets into the immigration system."