Cop Among 10 Dead In US Supermarket Shooting, Suspect In Custody

US Supermarket Shooting: Witnesses at the King Soopers supermarket in Boulder County, 30 miles (50 kilometers) northwest of the state capital Denver, said they initially heard multiple loud bangs outside the shop. 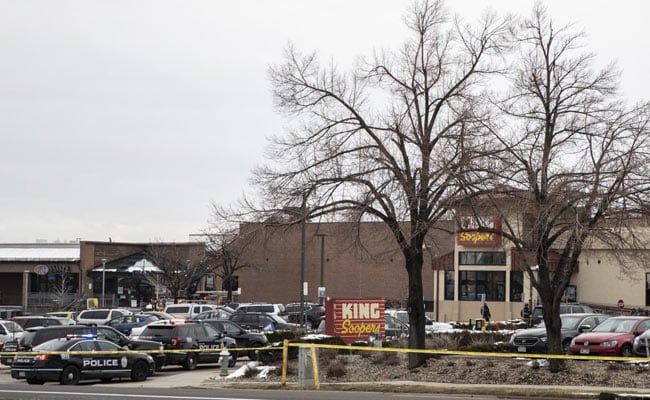 A gunman killed at least 10 people including a police officer at a grocery store in Colorado on Monday, police said, in the latest shooting to hit a state that was the site of two of the most infamous mass murders in US history.

Nevin Sloan, who narrowly escaped with his wife Quinlan, said panic then set in as the sound of gunshots drew closer and shoppers were forced to decide whether to stay put or make a break for the exit.

"All of a sudden we started hearing more, like 'bang, bang, bang, bang' and I sprinted over to her and just told her 'hey we need to get out of here'," he told CBS, saying they had helped others flee through an emergency exit.

"I just nearly got killed for getting a soda and a bag of chips," Ryan Borowski, who was in the store when he heard at least eight gunshots, told CNN.

Police chief Maris Herold said 10 people were killed, including officer Eric Talley, 51, who was first on the scene, paying tribute to his "heroic" colleague.

Live-streamed video earlier showed a white middle-aged man -- shirtless and seemingly covered in blood -- detained by police and led from the supermarket.

A suspect is being held in custody and was the only person suffering "serious injuries at this point," said police commander Kerry Yamaguchi, without confirming that the man in the video was the suspect or giving any possible motive.

Dozens of armored vehicles, ambulances and armed personnel including FBI agents and SWAT teams were deployed to the scene.

"Our hearts are broken over this senseless act of violence," said King Soopers spokeswoman Kelli McGannon, praising "first responders who so bravely responded to these acts of violence."

The incident follows another mass shooting last week at Asian-owned spas in the southeastern state of Georgia that left eight dead.

"Today we saw the face of evil. I am grieving with my community and all Coloradans," he said on Twitter.

The western state has previously suffered two of the most infamous mass shootings in US history -- massacres that prompted nationwide soul-searching but did not result in major changes to the country's lax gun ownership laws.

In 1999, two boys shot and killed 12 classmates and a teacher at Columbine High School.

Then in 2012, a heavily armed man stormed a movie theater in Aurora, murdering 12. The gunman is now serving a life sentence without the possibility of parole.

The city of Boulder imposed a ban on "assault-style weapons" and large-capacity gun magazines in the wake of the Parkland, Florida shooting in 2018.

But a judge last week blocked that ban, the Denver Post reported, in a decision hailed by the NRA, a pro-gun advocacy group.

"This administration will not wait for the next mass shooting to heed that call," he said.