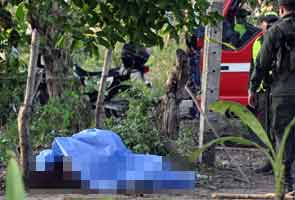 Bogota: A Colombian air force helicopter has crashed near the Caribbean coast and all 13 people aboard have been killed, officials said.

Atlantico State Civil Defence Director Jorge Fernandez said that the aircraft crashed in a field in a rural area of the town of Sabanagrande.

Two officials who spoke on condition of anonymity put the death toll at 13.

They said that the aircraft caught fire as it fell to the ground and that police and air force personnel were aboard.

Promoted
Listen to the latest songs, only on JioSaavn.com
Colombia's air force has said on its website that the Bell 212 helicopter crashed at 4.30pm local time and that the incident is under investigation.