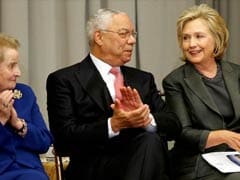 Washington: Former Secretary of State Colin Powell revealed distaste for both US presidential candidates, but leveled his most pointed criticism at Republican Donald Trump in hacked emails leaked by a group American intelligence officials suspect is linked to Russia.

In an email to Reuters on Wednesday, Powell confirmed the authenticity of the thousands of hacked messages but declined further comment.

In one of the leaked emails, Powell, a Republican, called Trump "a national disgrace" and an "international pariah" who allied himself with racists questioning whether President Barack Obama was born in the United States.

"When Trump couldn't keep that up," Powell wrote in the hacked message, "he said he also wanted to see if the (birth) certificate noted that he was a Muslim. As I have said before, 'What if he was?" Muslims are born as Americans everyday."

As for Clinton, Powell said in another email that the Democratic former secretary of state was "greedy" and had "unbridled ambition."

The new batch of leaked messages, some from as recent as late August, has renewed concern in Washington about hackers meddling on behalf of Russia in the November 8 election and US politics.

The White House so far has refrained from publicly blaming the attacks on Russia. "The United States has not made a formal determination in public about who may or may not be responsible," White House spokesman Josh Earnest told reporters during a daily briefing.

The head of the Democratic National Committee said on Tuesday the organization had been hacked by Russian state-sponsored agents who were trying to influence the US presidential election. Some committee documents were leaked in July.

In one of the newly leaked messages, from August 21, Powell, the first black US secretary of state, derided Trump's attempt to attract African-American voters.

Powell wrote to a friend: "There is nothing he can say that will sway black voters so he might as well say it to white folks. He is at 1% black voters and will drop. He takes us for idiots. He can never overcome what he tried to do to Obama with his search for the birth certificate hoping to force Obama out of the Presidency. Or, demanding his school transcripts to see how he got into Harvard---(eg, affirmative action)."In the same message, Powell called Trump's claim that "within four years he would have 95 percent of blacks voting for him a schizo fantasy."

'Screws up with hubris'

In a July 24, 2014, email, however, Powell made clear his discomfort with Clinton, writing: "I would rather not have to vote for her, although she is a friend I respect. A 70-year person with a long track record, unbridled ambition, greedy, not transformational" Clinton launched her second bid for the presidency in 2015.

In another email, August 18, 2015, he wrote, using her initials, that: "Everything HRC touches she kind of screws up with hubris."

In some of the thousands of messages posted on the website DCLeaks.com, which include several exchanges with Reuters reporters, the former top diplomat and retired four-star Army general also expressed his displeasure with the Clinton campaign's efforts to equate his use of an AOL email address with her installation of a private server in her home. After it was reported that Clinton had told FBI investigators that Powell had advised her to use a personal address, he lamented that what he called her "minions" were "making a mistake trying to drag me in."

Former National Security Adviser Condoleezza Rice, who served with Powell in Republican George W Bush's administration, agreed, writing to Powell that: "I don't think Hillary's 'everyone did it,' is flying. "Powell was harsher in an Aug. 21 message to a friend and former aide, writing: "Well, their email ploy this week didn't work and she once again looks shifty if not a liar. Trump folks having fun with her."

A Clinton campaign spokesperson declined to comment. Trump's campaign did not respond to a request for comment.

Promoted
Listen to the latest songs, only on JioSaavn.com
The Association of State Democratic Chairs sent a message, obtained by Politico, to its members on Wednesday warning that hackers are targeting state party officials and have successfully breached and impersonated some of them.