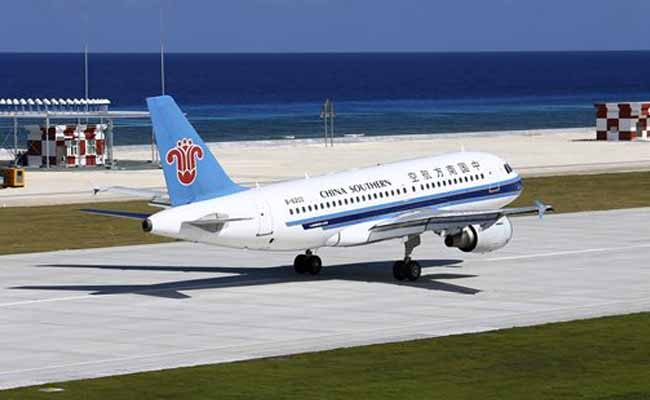 The China Daily newspaper reported today the planes made the two-hour flight to Fiery Cross Reef from Haikou on the southern island province of Hainan.

It said the test flights on Wednesday proved the runway's ability to safely handle large civilian aircraft. Photos showed one of the planes to be a China Southern Airlines Airbus A319-115.

China's building of seven islands by piling sand on reefs and atolls has been condemned by its neighbors and the United States, which accused China of raising tensions in an area where six governments maintain overlapping maritime territorial claims.

"They are red lines for us," Hammond said, adding that as a major trading nation, Britain expects to continue exercising those rights.

Philippine Foreign Secretary Albert del Rosario warned that China may next impose an air defense identification zone above the contested region, as it did over the East China Sea, and said such a move would be "unacceptable."

China has rejected calls for a halt in island construction, saying its claim of sovereignty over the entire area gives it the right to proceed as it wishes. It says the new islands are principally for civilian use but also help defend Chinese sovereignty.

China's robust assertions of its claims have sparked tense exchanges, mainly among China, Vietnam and the Philippines, over long-disputed and potentially oil- or gas-rich offshore territories also claimed by Taiwan, Malaysia and Brunei.

That's also creating new tensions with the US, which has refused to recognize the new islands as geographic features deserving of territorial waters and other aspects of sovereignty.

While Washington takes no formal position on the various sovereignty claims, it insists that disputes be settled peacefully and that freedom of navigation be maintained in waters through which more than 30 percent of global trade passes.

Fiery Cross Reef is the largest of the seven new islands that in total compose more than 800 hectares (2,000 acres) of reclaimed land. Its 3-kilometre (10,000-foot) airstrip is long enough to handle any plane operated by the Chinese military.

Another runway is being built on Subi Reef, with signs of similar work underway on nearby Mischief Reef. If all are completed, China would possess four airstrips in all on its South China Sea island holdings.