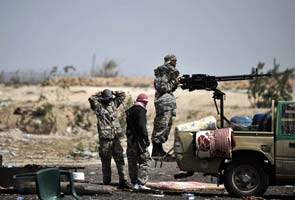 Washington: The Central Intelligence Agency has inserted clandestine operatives into Libya to gather intelligence for military airstrikes and to contact and vet the beleaguered rebels battling Col. Muammar el-Gaddafi's forces, according to American officials.

While President Obama has insisted that no American military ground troops participate in the Libyan campaign, small groups of C.I.A. operatives have been working in Libya for several weeks as part of a shadow force of Westerners that the Obama administration hopes can help bleed Colonel Gaddafi's military, the officials said.

In addition to the C.I.A. presence, composed of an unknown number of Americans who had worked at the spy agency's station in Tripoli and others who arrived more recently, current and former British officials said that dozens of British special forces and MI6 intelligence officers are working inside Libya. The British operatives have been directing airstrikes from British jets and gathering intelligence about the whereabouts of Libyan government tank columns, artillery pieces and missile installations, the officials said.

American officials hope that similar information gathered by American intelligence officers -- including the location of Colonel Gaddafi's munitions depots and the clusters of government troops inside towns -- might help weaken Libya's military enough to encourage defections within its ranks.

In addition, the American spies are meeting with rebels to try to fill in gaps in understanding who their leaders are and the allegiances of the groups opposed to Colonel Gaddafi, said United States government officials, speaking on the condition of anonymity because of the classified nature of the activities.  American officials cautioned, though, that the Western operatives were not directing the actions of rebel forces.

The United States and its allies have been scrambling to gather detailed information on the location and abilities of Libyan infantry and armored forces that normally takes months of painstaking analysis.

"We didn't have great data," Gen. Carter F. Ham, who handed over control of the Libya mission to NATO on Wednesday, said in an e-mail last week.   "Libya hasn't been a country we focused on a lot over past few years."

Several weeks ago, President Obama signed a secret finding authorizing the C.I.A. to provide arms and other support to Libyan rebels, American officials said Wednesday. But weapons have not yet been shipped into Libya, as Obama administration officials debate the effects of giving them to the rebel groups. The presidential finding was first reported by Reuters.

In a statement released Wednesday evening, Jay Carney, the White House press secretary, declined to comment "on intelligence matters," but he said that no decision had yet been made to provide arms to the rebels.

Representative Mike Rogers, a Michigan Republican who leads the House Intelligence Committee, said Wednesday that he opposed arming the rebels. "We need to understand more about the opposition before I would support passing out guns and advanced weapons to them," Mr. Rogers said in a statement.

Because the publicly stated goal of the Libyan campaign is not explicitly to overthrow Colonel Gaddafi's government, the clandestine war now going on is significantly different from the Afghan campaign to drive the Taliban from power in 2001. Back then, American C.I.A. and Special Forces troops worked alongside Afghan militias, armed them and called in airstrikes that paved the rebel advances on strategically important cities like Kabul and Kandahar.

In recent weeks, the American military has been monitoring Libyan troops with U-2 spy planes and a high-altitude Global Hawk drone, as well as a special aircraft, JSTARS, that tracks the movements of large groups of troops.  Military officials said that the Air Force also has Predator drones, similar to those now operating in Afghanistan, in reserve.

Air Force RC-135 Rivet Joint eavesdropping planes intercept communications from Libyan commanders and troops and relay that information to the Global Hawk, which zooms in on the location of armored forces and determines rough coordinates. The Global Hawk sends the coordinates to analysts at a ground station, who pass the information to command centers for targeting. The command center beams the coordinates to an E-3 Sentry Awacs command-and-control plane, which in turn directs warplanes to their targets.

Lt. Gen. David A. Deptula, who recently retired as the Air Force's top intelligence official, said that Libya's flat desert terrain and clear weather have allowed warplanes with advanced sensors to hunt Libyan armored columns with relative ease, day or night, without the need for extensive direction from American troops on the ground.

But if government troops advance into or near cities in along the country's eastern coast, which so far have been off-limits to coalition aircraft for fear of causing civilian casualties, General Deptula said that ground operatives would be particularly helpful in providing target coordinates or pointing them out to pilots with hand-held laser designators.

The C.I.A. and British intelligence services were intensely focused on Libya eight years ago, before and during the successful effort to get Colonel Gaddafi to give up his nuclear weapons program. He agreed to do so in the fall of 2003, and allowed C.I.A. and other American nuclear experts into the country to assess Libya's equipment and bomb designs and to arrange for their transfer out of the country.

Once the weapons program was eliminated, a former American official said, intelligence agencies shifted their focus away from Libya. But as Colonel Gaddafi began his recent crackdown on the rebel groups, the American spy agencies have worked to rekindle ties to Libyan informants and to learn more about the country's military leaders.

A former British government official who is briefed on current operations confirmed media reports that dozens of British Special Forces soldiers, from the elite Special Air Service and Special Boat Service units, are on the ground across Libya. The British soldiers have been particularly focused on finding the locations of Colonel Gaddafi's Russian-made surface-to-air missiles.

Promoted
Listen to the latest songs, only on JioSaavn.com
A spokesman for Britain's Ministry of Defense declined to comment, citing a policy not to discuss the operations of British Special Forces.