Christopher Freeman said the boy, a student at Bear Lakes Middle School in West Palm Beach, Florida, was crying and said he had been "slammed" by a teacher. Then the call went dead. 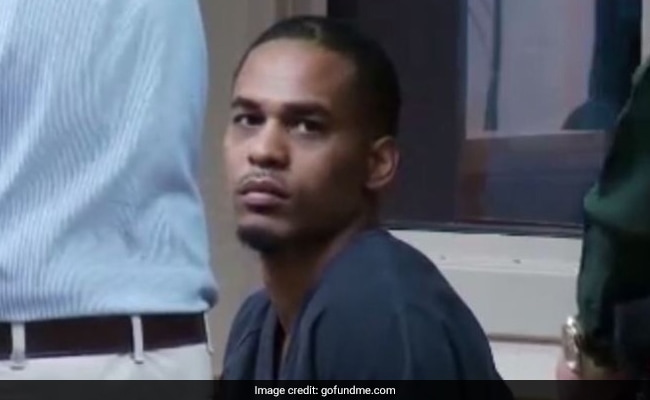 A AK-47 Mini Draco with a loaded, 30-round extended magazine was found on Christopher Freeman

Freeman said the boy, a student at Bear Lakes Middle School in West Palm Beach, Florida, was crying and said he had been "slammed" by a teacher. Then the call went dead.

An hour later, Freeman, 27, showed up at the school - carrying a loaded semiautomatic gun.

"I want to see the guy who slammed my son," Freeman said, according to a police report. "I've got something for him."

The school district's police force put Bear Lakes on lockdown, and Freeman was arrested and charged with possession of a firearm on school grounds, aggravated assault with a weapon and disrupting a school function. His bond was set at $75,000, the South Florida Sun Sentinel reported.

According to an arrest report from the Palm Beach County schools police, an assistant principal at the middle school had called Freeman that afternoon to talk about the incident involving his son.

"If this isn't my son, you're all dead," Freeman said when he answered the phone, the principal later told police.

Freeman told the assistant principal he was on his way to the school. The principal notified police, and an officer met Freeman in the main hallway inside the middle school, according to the arrest report. Freeman was in a wheelchair, and the officer began escorting him into the main office.

"You're going to need more than what you've got because of what I've got," Freeman said, according to police.

That's when the officer noticed a "large firearm" tucked into Freeman's pants on the right side of his body, officials said. Freeman was "visibly upset" and "yelling and screaming," according to the report.

The officer then diverted Freeman to a breezeway outside the main office and put the school on a lockdown.

"You ain't touching me," Freeman reportedly said when the officer inquired about a gun and asked to search him.

Backup arrived, officials said, and found on Freeman an AK-47 Mini Draco with a loaded, 30-round extended magazine. The gun had a bullet in the chamber, police said.

(Except for the headline, this story has not been edited by NDTV staff and is published from a syndicated feed.)
Comments
Christopher FreemanBear Lakes Middle SchoolWest Palm Beach Florida