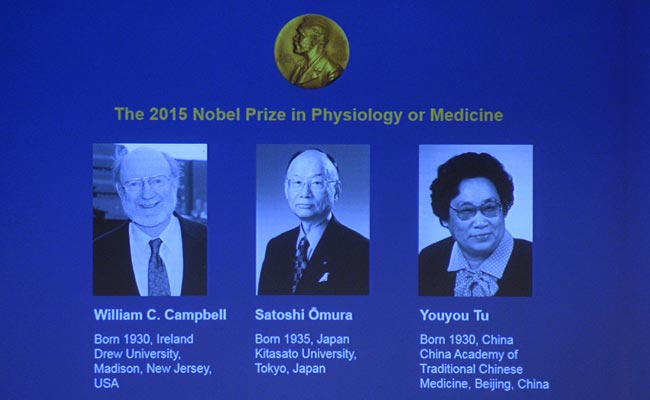 Beijing: Tu Youyou, the first Chinese woman to win a Nobel prize for medicine, said today she was "not really surprised" to be recognised after a remarkable career which saw her team test a breakthrough malaria drug on themselves during the chaos of the Cultural Revolution.

"We carried out this research over a number of decades, so to win this award was not a surprise," the 84-year-old told the Qianjiang Evening News from her home in Zhejiang.

Tu Youyou won half of the award for her work on artemisinin, an anti-malarial drug based on ancient Chinese herbal medicine, it was announced Monday.

Derived from a herb used to treat fevers some 1,700 years ago, the drug revolutionised cures for malaria and is credited with saving millions of lives.

"I was a little bit surprised, but not really," she said of the moment she learnt of the award as she watched television.
"It's because (this prize) is not an honour just for me, but an honour for all Chinese scientists."

In the late 1960s, Tu and a team investigated more than 2,000 Chinese herb preparations and at first identified 640 that had possible antimalarial activity -- but with no significant results in experiments with mice except for one: Artemisia annua extract.

But when these promising results could not be replicated, the team were befuddled.

They turned to ancient Chinese literature for help, finding the answer in the writings of alchemist Ge Hong, who died in the year 343.

In "A Handbook of Prescriptions for Emergencies," Ge described Artemisia's properties for reducing the symptoms of malaria and gave this tip: "A handful of qinghao immersed with two litres of water, wring out the juice and drink it all."

Centuries later, his words were a lightbulb moment.

"This sentence gave me the idea that the heating involved in the conventional extraction step we had used might have destroyed the active components," Tu Youyou  wrote in a 2011 article.

The researchers were working at the height of the Mao Zedong's chaotic 1966-1976 Cultural Revolution, which saw large numbers of people, including academics, persecuted.

The team had no way to test the product on conventional lab animals, but they were so confident in its safety that they tested it on themselves.

Today, Tu Youyou suffers from diabetes and ailing health, and the attention she has received since the announcement of her Nobel Prize has left her "very tired", husband Li Tingzhao told AFP.

"She doesn't go out often" and was not thinking about holding a press conference, Li Tingzhao said.

He did not know whether the retired traditional medicine specialist would be fit to travel to the awards ceremony at the end of this year.

Tu Youyou, who won the prestigious Albert-Lasker in 2011 and has long been considered a frontrunner for the Nobel, has described artemisinin as "a true gift from old Chinese medicine".

The 2015 Nobel prize for medicine was also awarded to William Campbell, an Irish-born American, and Japanese Satoshi Omura.

US Hopes To Soon Relocate Afghan Pilots Who Fled To Tajikistan: Official