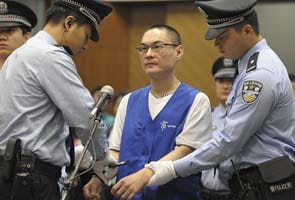 Beijing: A Beijing court on Wednesday convicted a man of murder and sentenced him to death for hurling a toddler to the ground in a case that horrified the Chinese public.

The 2-year-old girl was severely injured and died in a hospital days after the incident. Her attacker, Han Lei, fled the scene, but police caught him the following day. In court, he said he thought he had been throwing a shopping cart to the ground.

The July 23 incident in a southern district of Beijing started with a dispute as the girl and her mother were waiting at a bus stop, the Beijing court system said in a statement on its official microblog.

The court said Han, 39, was looking for a parking space when he got out of his car, telling the mother that the carriage was in his way for parking. It said Han beat the woman to the ground, grabbed the girl from her carriage and raised her above his head before throwing her to the ground.

"At that time I didn't know it was a baby carriage. I thought because the woman had just been shopping that it was a shopping cart," state media quoted Han as saying in court.

Promoted
Listen to the latest songs, only on JioSaavn.com
His lawyer said Han hadn't intended to cause the girl's death, but the Beijing No. 1 Intermediate People's Court convicted him of murder and gave him the death penalty. A second man, Li Ming, who drove Han away from the scene, was sentenced to five years in prison for hiding the suspect, the statement said.

Han's death sentence will be reviewed by the Supreme People's Court, as required of all death penalties in China.