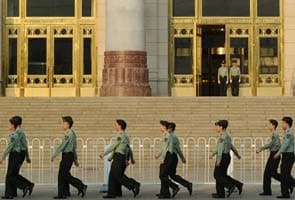 Beijing: Two top Shanghai judges and another court official caught on videotape apparently taking prostitutes to hotel rooms after dining with a contractor have been stripped of their Communist Party membership and will likely lose their jobs.

The case, exposed by the homespun sleuthing of a disgruntled defendant in a civil case, has aggravated public distrust of the court system and shed new light on continued wrongdoing by officials despite the Chinese leadership's vow to crack down on all corruption.

"They slept with prostitutes, but they raped the law," commentator Liu Xuesong wrote in an editorial posted on the website of the Hong Kong-based Phoenix TV broadcaster and widely circulated online Wednesday in mainland China.

The hotel surveillance video, secretly copied and released publicly by a man who went to the hotel claiming he needed to see the videotapes to recover lost property, had triggered an investigation by the Shanghai Communist Party Committee.

The panel said late Tuesday that the three Shanghai Supreme Court officials "participated in prostitution" after being invited to dinner. A fourth court official accepted female companionship that evening but did not take a woman to a room, the panel said.

The statement did not clarify whether the contractor paid for prostitutes, but party rules forbid both involvement in prostitution and accepting bribes. The committee said the three involved in prostitution were stripped of party membership while the fourth court official was on probation, and that it was requesting that the court dismiss all four employees.

The party-run People's Daily newspaper, in commenting on the case Wednesday, said it was important for the image of judges to remain untarnished.

"The images of judges are not about themselves but also inherently related to the credibility of the judicial system and the public trust of law," the editorial said.

Whistleblowers in China run the risk of retribution from powerful officials, and leaders are deeply wary of enlisting the public in the fight against corruption, preferring to wage the campaign on their own terms. However, the man who leaked the hotel videos - identified in state-run media reports only by his surname, Ni - has appeared to face no repercussions from his actions so far.

Ni has told state-run media outlets that he set out to expose wrongdoings of one of the judges, Shanghai Supreme Court justice Zhao Minghua, after getting what he believed was unfair treatment in a court case handled by another judge.

Ni said he found out that Zhao was cousins with the plaintiff in the case, a contract dispute in a building project, and he suspected the judge had exerted influence on the courtroom outcome. Ni told state media he then spent a year stalking Zhao, and found his opportunity on June 9 when he followed the judge to a resort hotel.

Ni said he later went to the hotel management claiming that he had lost something and asking to review surveillance videos, secretly filming copies and finding that they showed Zhao and colleagues taking women into their hotel rooms.

Promoted
Listen to the latest songs, only on JioSaavn.com
A prominent Chinese business magazine, Caixin, said that the whistleblower had posted the hotel video online after he filed a police complaint in April but "the case went nowhere." It said he spoke to the magazine in an interview but his name was not published.

"It is clear that he realized the failed police report meant officials enjoy special protection," the magazine said. "An ordinary citizen making a report through official channels is likely to make little headway."