Demand for ivory from Asian countries such as China, where it is turned into jewels and ornaments, has led to a surge in poaching across Africa. 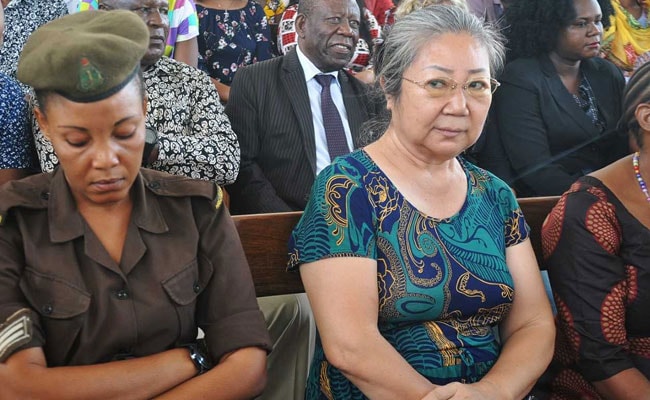 A prominent Chinese businesswoman dubbed the "Ivory Queen" was sentenced to 15 years in prison by a Tanzanian court on Tuesday for smuggling the tusks of more than 350 elephants, weighing nearly 2 tonnes, to Asia.

Yang Feng Glan had been charged in October 2015 along with two Tanzanian men with smuggling 860 pieces of ivory between 2000 and 2004 worth 13 billion shillings ($5.6 million). All three denied the charges.

Police sources said Yang, 69, had lived in Tanzania since the 1970s and was secretary-general of the Tanzania China-Africa Business Council. A Swahili-speaker, she also owns a popular Chinese restaurant in Dar es Salaam.

Kisutu Court Magistrate Huruma Shaidi sentenced Yang, Salivius Matembo and Manase Philemon, each to 15 years, after they were convicted of leading an organised criminal gang.

Shaidi ordered them to either pay twice the market value of the elephant tusks or face another two years in prison.

In court documents, prosecutors said Yang "intentionally did organise, manage and finance a criminal racket by collecting, transporting or exporting and selling government trophies" weighing a total of 1.889 tonnes.

Speaking in Beijing, Chinese Foreign Ministry spokesman Geng Shuang said China had firm laws on protecting endangered wildlife and went after those who broke the law.

"We do not shield the illegal activities of Chinese citizens, and support the relevant Tanzanian authority's just investigation of and trying of this case in accordance with the law," he told a daily news briefing.

Conservationists welcomed Yang's conviction, saying it was proof of the government's seriousness in the fight against wildlife poaching but criticised the sentence.

Demand for ivory from Asian countries such as China and Vietnam, where it is turned into jewels and ornaments, has led to a surge in poaching across Africa.

In March 2016, Tanzania sentenced two Chinese men to 35 years each in jail for ivory smuggling, while in December 2015 another court sentenced four Chinese men to 20 years in jail each after they were convicted of smuggling rhino horns.

Yang was escorted under tight security to the Ukonga prison in Dar es Salaam where she is expected to serve her jail time.