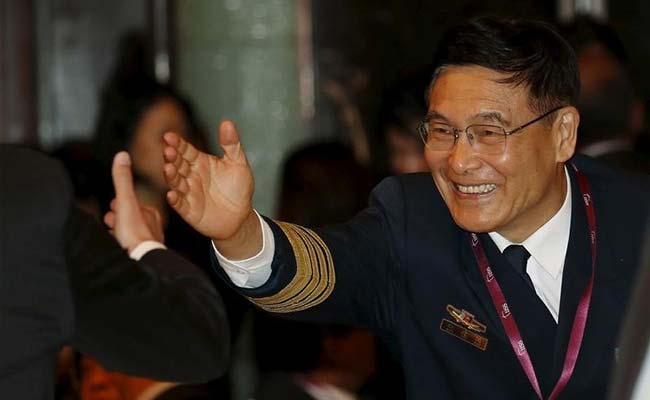 Deputy Chief of General Staff of the Chinese People's Liberation, Sun Jianguo, at the International Institute for Strategic Studies Shangri-La Dialogue in Singapore May 29, 2015. (Reuters)

Beijing, China: China wants to deepen military ties with Iran, a senior Chinese admiral was quoted as saying today after a meeting with Iran's defence minister in Tehran.

"The aim of this delegation's visit is to further promote friendship, deepen cooperation and exchange views with Iran on bilateral military ties and issues of mutual concern," Sun said, according to the statement.

The trip will also "promote the preservation of international and regional peace and stability", he added.

China and Iran have close diplomatic, economic, trade and energy ties, and China has been active in pushing both the United States and Iran to reach agreement on Iran's controversial nuclear programme.

Under a multilateral deal, agreed in July, sanctions imposed by the United States, European Union and United Nations will be lifted in return for Iran agreeing to long-term curbs on a nuclear programme that the West has suspected was aimed at creating a nuclear bomb.

Sun said that China, the biggest buyer of Iranian oil, was pleased that an agreement had been reached.

Last year, for the first time ever, two Chinese warships docked at Iran's Bandar Abbas port to take part in a joint naval exercises in the Gulf and an Iranian admiral was given tours of a Chinese submarine and warships.

Iran and Russia have both provided support for President Bashar al-Assad in Syria's civil war. China, however, remains a low key diplomatic player in the Middle East despite its dependence on the region's oil. Beijing has repeatedly warned that military action cannot end the crisis in Syria and has called multiple times for talks and a political solution.
© Thomson Reuters 2015