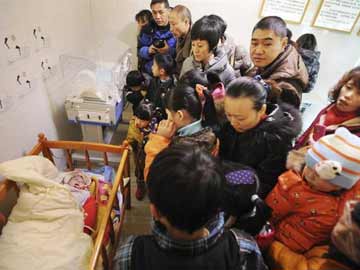 Residents visit an abandoned baby (L) lying in a crib at a baby hatch in Guiyang, Guizhou province on January 12, 2014

Tainjin, China: Fangfang was just a few days old when she was abandoned on a near freezing New Year's Day in north China.

She was relatively lucky. Unlike the many who are found dumped in train stations or toilets, her family left her at a safe, warm shelter.

Dozens of babies have been secretly dropped off at "baby safety islands", or "baby hatches", set up since late last year under a scheme aimed at protecting unwanted offspring.

"We need to build these islands to protect children from further injury," Zhang Min, head of a government-run orphanage in the northern coastal city of Tianjin where Fangfang was found.

The babies there are dropped off in a cosy room with pink walls, a cradle and an incubator. Fangfang was left in a handbag on the floor.

Chinese media frequently report harrowing tales of babies being abandoned, a problem attributed to young mothers unaware they are pregnant, the birth of an unwanted girl in a society which puts greater value on boys or China's strict family planning rules.

In one such case, a baby was found in a dumpster on the outskirts of Beijing. He didn't survive. In another, firemen in eastern China rescued an abandoned newborn boy from a sewage pipe.

Once orphanages in China were overwhelmingly filled with girls due to the cultural preference for male heirs and three decades of a strict one-child policy - if couples were allowed only one child, many wanted to make sure it was a boy.

MATTER OF LIFE AND DEATH

The preference still exists, but it is much less prevalent as the world's second-largest economy grows and the country becomes more wealthy. So the abandoned children tend to be of both genders - and they are usually seriously sick or disabled.

Fangfang, the first baby abandoned at the Tianjin hatch, outside the gate of a city orphanage, has Down's syndrome and congenital heart disease.

Government officials say baby hatches are needed because of the illnesses and disabilities, often in need of immediate medical attention. Each province has to set up a minimum of two by the end of the year.

"With more and more disabled children, it could mean they die if we find them 10 minutes late," said Ji Gang, an official with the China Centre for Children's Welfare and Adoption.

Baby hatches have sparked concern among some they may encourage more parents to abandon babies. Some were busy when they opened, under the media spotlight, but the numbers soon dropped off, welfare officials said.

Welfare experts and officials note that China has various charity funds and government health insurance schemes to help the sick and disabled.

Promoted
Listen to the latest songs, only on JioSaavn.com
But they also note that China suffers from a lack of a unified welfare system.

"If there were such a system, a lot of parents wouldn't abandon their children," said Ji, of the welfare and adoption centre. "We wouldn't have to build so many baby hatches."
© Thomson Reuters 2014
Comments
Chinaabandoned babies