China's Rich Pimp Their Planes as Jet Market Takes off 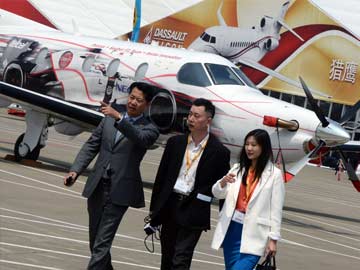 This photo taken on on April 14, 2014 shows Chinese businessmen walking past private planes for sale during the Asian Business Aviation Conference and Exhibition (ABACE2014) at the Shanghai Hongqiao airport.

Shanghai: When a Chinese customer asked for the interior of his new Bombardier Challenger 850 jet to be covered with pricey black carbon fibre, the designer was shocked -- but happy to oblige.

"We'll do whatever you want, as long as it's within the realm of certification," said Sean Gillespie, executive vice president for sales of Flying Colours, a North American aviation services firm.

"But carbon fibre, we've used it before, but usually it's used as a trim."

The market for private jets -- sometimes called business or executive jets -- is a small but fast growing aviation segment in China, where rapid economic development has created a surge of new wealth.

The first US Gulfstreams only arrived in the country in 2003 but a decade later there were 248 business jets in China, a 28 percent leap on 2012's figure, according to consultancy Asian Sky Group.

Customers include Jack Ma of e-commerce giant Alibaba, in the process of a multi-billion dollar share offer in the United States, and Wang Jianlin of Wanda Group, which bought the US cinema chain AMC.

"Buyers can be in their 20s, in their 70s. They can be in real estate, investment, oil and gas. They are from all over China," said Jason Liao, head of consultancy China Business Aviation Group.

"There is no typical Chinese buyer," he said.

One thing they have in common: tens of millions of dollars available to buy their own planes. European firm Airbus has just started offering an $80 million budget version of its corporate jet in China, with a pre-designed cabin instead of a fully-customised one.

They can be swayed by the little details. So Gulfstream has a place for a rice cooker on board, Brazil's Embraer can sync an iPad to adjust lights and climate control and Airbus offers a round table for playing mah-jong.

- Possible turbulence -
Chinese billionaires' most common destinations are nearby Asian cities such as Hong Kong, Macau and Singapore for gambling and entertainment, but they nonetheless prefer "long range, big cabin" aircraft with the ability to cross the Pacific and bring North America within reach, Airbus and Ledbury Research said in a report.

Even so, manufacturers are quick to promote planes as a business tool, rather than a toy of the rich.

There are some dark clouds on the horizon for the market: more moderate economic growth and limits on flight paths since most of China's airspace is controlled by the military, along with a lack of infrastructure for private planes.

China has just 286 landing sites suitable for these types of aircraft, according to state media.

"There are some challenges with airspace, with airport take-off and landing restrictions," said Scott Neal, senior vice president for sales and marketing at Gulfstream.

At the moment, potential buyers are also eager to keep a low profile amid an on-going government austerity campaign and anti-corruption drive launched after Chinese leader Xi Jinping took over as head of the ruling Communist Party at the end of 2012.

"If you back up two years ago, this market was really happening very fast and was kind of electric," said Stephen Taylor, president of Boeing Business Jets.

"It definitely has been less aggressive and a more subdued market ever since the new administration came in and started pushing against some of the luxury items."

Asian Sky's general manager Jeffrey Lowe added: "Maybe not getting into the biggest and flashiest airplane is certainly the best approach these days."

But, he said, "other than that, they still have a definite need for the aircraft and most of them are finding ways to buy".

Promoted
Listen to the latest songs, only on JioSaavn.com
At a recent air show in Shanghai a middle-aged man sat near a Gulfstream display but declined to give his name and attributed his presence to his tall companion, introducing her as a fashion designer.

"I only came along because my girlfriend wanted to look at planes," he said.