The lower spending increase comes as the country's economy is slowing, with the government setting a lower growth target of 6.0-6.5 percent. 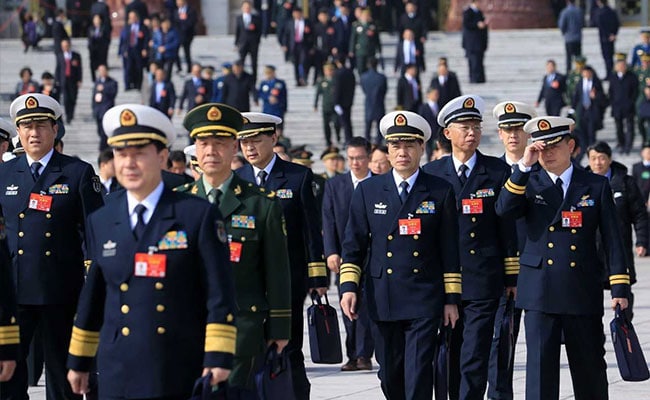 Boasting the world's largest army, China's military spending is second only to the US. (Reuters)

China announced Tuesday a 7.5 percent increase in military spending in 2019, lower than last year as the country faces an economic slowdown, but still likely to make Asian neighbours nervous.

It it working to provide the two million-strong People's Liberation Army (PLA) with state-of-the-art hardware, spending heavily on stealth warplanes, aircraft carriers and other weaponry.

Beijing has also stepped up its rhetoric against any independence movements in self-ruled Taiwan and continues to assert its vast territorial claims in the disputed South China Sea and East China Sea.

The government will spend 1.19 trillion yuan ($177.6 billion) on defence in 2019, after it increased its outlay by 8.1 percent to 1.11 trillion yuan in 2018, according to a government report presented at the start of the annual meeting of the National People's Congress (NPC).

Boasting the world's largest army, China's military spending is second only to the United States, which budgeted $716 billion for defence in 2019. Beijing has not posted double-digit spending increases since 2015.

The Communist-led government will make "further efforts to ensure the political loyalty of the armed forces," Premier Li Keqiang said in a speech to the nearly 3,000 members of parliament, stressing the "absolute party leadership" over the military.

The lower spending increase comes as the country's economy is slowing, with the government setting a lower growth target of 6.0-6.5 percent.

"China has other national priorities and an over-militarised national economy can deprive the government of much-needed resources, as what had happened to the former USSR," Char said.

Chinese President Xi Jinping, who has vowed to turn the PLA into a "world class" military by mid-century, has repeatedly called on the army to be combat-ready.

"In Taiwan, you can legitimately worry about the Chinese budget increases, because they coincide with a more aggressive posture towards Taipei," said Barthelemy Courmont, Asia researcher at the Institute for Strategic and Foreign Relations in Paris.

But NPC spokesman Zhang Yesui said Monday China's military spending "doesn't pose a threat to other countries" and is aimed at maintaining sovereignty and security.

The Communist Party has focussed on catching up with technology used by armed forces in the United States and western Europe.

Premier Li said China will "speed up efforts to make innovations in defence-related science and technology."

China has built a second aircraft carrier -- its first domestically manufactured one -- and has put it through sea trials in recent months as it prepares to put it into operation.

Beijing is also building new generation destroyer vessels, fighter jets and ballistic missiles, while research is ongoing for the development of electromagnetic railguns and anti-satellite lasers.

Authorities, experts and state media say the PLA needs to improve the pay and living conditions of its troops.

Efforts to professionalise the army and make it ready for warfare require more military exercises, which mean more spending on munitions and fuel.

While Beijing's military spending lags behind the US, it still far surpasses that of other nations -- in 2018, China spent more than twice as much as the third biggest spender, Saudi Arabia ($82.9 billion), and even more than Russia ($63.1 billion) and India ($57.9 billion), according to the International Institute for Strategic Studies (IISS).