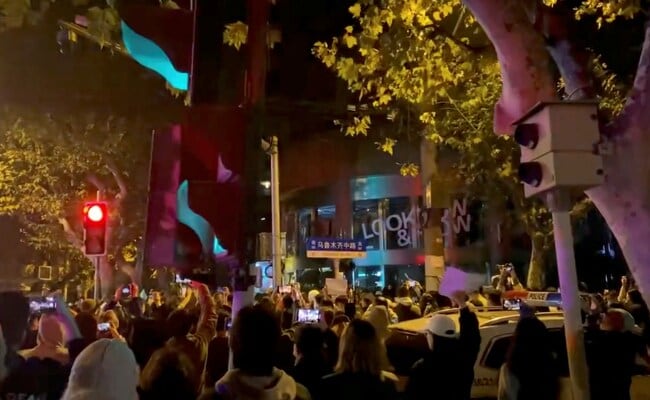 The rights group said the authorities should immediately release all wrongfully detained protesters.

The Chinese government should respect the fundamental rights of people across China to peacefully protest the government's draconian "zero Covid" restrictions and to call for freedom and human rights, Human Rights Watch (HRW) has said.

Over the weekend, thousands of people in Shanghai, China's biggest city and financial centre, began publicly protesting the government's strict Covid-19 measures and denouncing the Chinese Communist Party's authoritarian rule. University students across the country gathered on their campuses to demonstrate, and that night, hundreds of people in Wuhan, where Covid-19 originated, Chengdu, Beijing, and other large cities, took to the streets.

"People across China are taking extraordinary risks to demand their human rights," said Yaqiu Wang, senior China researcher at Human Rights Watch. "The Chinese authorities should not suppress the protests but instead allow everyone to peacefully express their views."

The protest in Shanghai was in response to a November 24 fire at an apartment building in Urumqi, the capital of China's northwest Xinjiang region, in which at least 10 people were killed. Many people suspected, though Human Rights Watch could not confirm, that residents were prevented from escaping the blaze due to pandemic control barriers, and emergency responders were hampered by Covid-related restrictions.

Videos circulated online show dozens of police officers arriving at protest sites in Shanghai and elsewhere, trying to disperse the crowds, and dragging protesters into police vehicles. Shanghai police handcuffed a BBC journalist covering the protest and took him to a police station, where they kicked and beat him. One video shows an unidentified man in plain clothes snatching a lone woman holding a blank piece of paper standing on the steps of the Communication University of China in Nanjing.

"While small-scale protests over specific government abuses happen occasionally in China, it is extremely rare for people to publicly call for President Xi Jinping to step down or for the end of Communist Party rule. The authorities punish any perceived challenge to the Party's hold on power with long prison sentences under highly abusive conditions," the HRW said.

According to the rights group, the Chinese government has a history of violently suppressing protests, with the most notable incident being the 1989 Tiananmen Massacre, when military forces killed an untold number of peaceful pro-democracy demonstrators in Beijing.

Governments and international organizations that speak about human rights in China should express support for people's rights to free speech and assembly, and urge the Chinese authorities not to suppress the protests, Human Rights Watch said.

"Chinese authorities have badly underestimated the willingness of people across China to risk all to have their rights and liberties respected," Wang said. "People in China with incredible courage are showing the Chinese Communist Party and the world that they, like everyone else, are entitled to have a say in how they are governed."