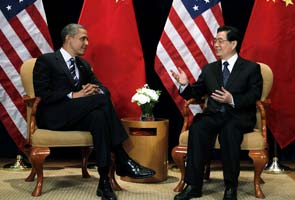 Washington: President Hu Jintao of China is coming to town this week, and American officials say President Obama will be taking a far more assertive stance as he greets his biggest global economic rival.

On the pomp and ceremony front, the Obama administration appears to be deploying much of the White House's considerable protocol arsenal.

The Chinese president is getting not one, but two, dinners with Mr. Obama: first an intimate meal at the White House on Tuesday night, and then a grand state dinner on Wednesday. There will also be a lunch at the State Department hosted by Vice President Joseph R. Biden Jr.; a joint news conference with Mr. Obama; a joint appearance with the president before American and Chinese business leaders; and chats on Capitol Hill with Democratic and Republican leaders.

But the White House has prepared for the visit in other ways in the past two weeks, dispatching several cabinet officials to publicly lay down challenges for Mr. Hu.

Defense Secretary Robert M. Gates had a testy series of meetings in Beijing last week, telling reporters beforehand that the United States would counter China's military buildup in the Pacific by stepping up investments in weapons, jet fighters and technology.

Last Wednesday, Treasury Secretary Timothy F. Geithner said the United States would grant China more access to high-tech American products and expand trade and investment opportunities in the United States only if China opened its own domestic market to American products. Mr. Geithner said China also needed to take additional steps to allow its currency, the renminbi, to appreciate in value -- an issue a bipartisan group of senators vowed on Monday to address with legislation this year.

Then on Friday, Secretary of State Hillary Rodham Clinton publicly criticized China's human rights record, citing the persecution of the pro-democracy group Charter 08 and the imprisonment of Liu Xiaobo, the political activist who was awarded the Nobel Peace Prize, but whose family was blocked from attending the prize ceremony in Oslo last month.

"The longer China represses freedoms," she said, "the longer that Nobel Prize winners' empty chairs in Oslo will remain a symbol of a great nation's unrealized potential and unfulfilled promise."

David Rothkopf, a national security expert who worked in the administration of President Bill Clinton, said: "There's been this well-orchestrated and clearly well thought-out campaign, over the past two weeks, involving the secretary of state, Treasury, defense and commerce making strong statements regarding currency, the trade imbalance, human rights and China's military stance." He added, "So you're welcoming the leader of the most important rival power in the world into the capital, and the way you pave his entrance into the city is laid with these four big thorny issues."

The more assertive strategy comes after Mr. Obama was criticized as appearing to kowtow to China in his visit there in 2009, and then again for allowing Beijing to get the upper hand against the United States at the Group of 20 summit meeting in Seoul late last year.

In Seoul, instead of getting hammered on its currency, China managed to persuade Europe to join it in rejecting core elements of Mr. Obama's strategy of stimulating growth before focusing on deficit reduction. In addition, several major nations accused the Federal Reserve of deliberately devaluing the dollar in an effort to put the costs of America's competitive troubles on trading partners, rather than taking politically tough measures to rein in spending at home.

The result was that Mr. Obama appeared on the world stage as a leader of a country losing ground to a rising China.

Administration officials are determined that this will not happen during the visit to Washington this week. For one thing, the slight improvements in the American economy, coupled with a handful of political successes for Mr. Obama at home, will put the president in a stronger position, administration officials and some Asia analysts said.

More significant, they said, is that administration officials have now concluded that they can publicly challenge China on security and economic issues and still build a mature relationship.

Eswar Shanker Prasad, a former economist with the International Monetary Fund who now teaches trade policy at Cornell University, said China may have helped to strengthen the administration's hand. Recent Chinese moves to restrict access to its domestic economy have so frustrated American companies that corporate leaders are pressing the Obama administration to take a tougher stance.

"That's why Geithner was so blunt about saying China has to provide more market access," Mr. Prasad said. "I think Geithner's speech set the tone very clearly about what they are trying to do. The language is very clear, and they are making the quid pro quo explicit."

Mr. Hu is bringing a number of Chinese business leaders with him. Xinhua, the Chinese news agency, reported that U.S. and Chinese business leaders on Monday signed deals in Texas worth $600 million, the first of what are expected to be billions of trade deals tied to Mr. Hu's visit, including one with General Electric and a Chinese state-owned company for aviation equipment.

And the White House has set apart 45 minutes on Wednesday for the two leaders to meet with American and Chinese corporate leaders.

"There will be American C.E.O.'s who have large interests and investments in China," Tom Donilon, the national security adviser, said at a White House briefing for reporters on Friday. "And I'm sure there will be discussion there about how American business can better do business in China, to talk about the access issues that are so very important and that Secretary Geithner talked about in his speech."