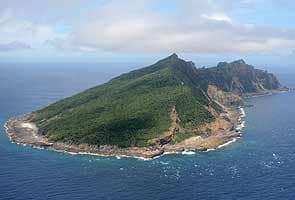 Beijing: China's new passports show a map including its claim to almost all the South China Sea -- provoking protests by the Philippines Thursday and Vietnam but leaving out islands bitterly disputed with Japan.

Beijing has been engaged in a simmering row with its southern neighbours over its claim to vast swathes of the South China Sea, with Chinese maps having a "nine-dash line" that runs almost to the Philippine and Malaysian coasts.

The row saw a maritime standoff with Manila earlier this year and took centre stage at the East Asia Summit, attended by US President Barack Obama, earlier this week.

China and Japan have also engaged in furious exchanges over East China Sea islands administered by Tokyo, which calls them Senkaku, and claimed by Beijing as Diaoyu. China saw mass protests over them nationwide in September.

The latest front in the South China Sea dispute is travel documents issued by Beijing, with its new computer-chipped passport, or e-Passport, showing various islands as Chinese territory, including the Paracels and Spratlys.

But the Senkaku/Diaoyu islands are absent, Tokyo said.

"The Philippines strongly protests the inclusion of the nine-dash lines in the e-Passport as such image covers an area that is clearly part of the Philippines' territory and maritime domain," del Rosario said.

Foreign ministry spokesman Raul Hernandez added: "If we allow that, then that would mean acquiescence to their claim of the whole of the South China Sea."

The South China Sea is strategically significant, home to some of the world's most important shipping lanes and believed to be rich in resources.

The Paracel islands lie within it and have been held by China since it forced out South Vietnamese troops in 1974, but they are still claimed by Hanoi.

Some social media users in China said the maps had delayed them at Vietnamese immigration.

"I got into Vietnam after lots of twists and turns," said one user of China's hugely popular microblogging site Sina Weibo, saying an entry stamp was initially refused "because of the printed map of China's sea boundaries -- which Vietnam does not recognise".

Vietnamese foreign ministry spokesman Luong Thanh Nghi told reporters on Thursday that the Chinese documents amounted to a violation of Hanoi's sovereignty and it had protested to the embassy.

Other claimants to parts of the South China Sea are Brunei, Malaysia and Taiwan.

Beijing attempted to downplay the diplomatic fallout from the recently introduced passports, with a foreign ministry spokeswoman saying the maps were "not made to target any specific country".

"We hope to maintain active communication with relevant countries and promote the healthy development of people to people exchanges," Hua Chunying added.

Promoted
Listen to the latest songs, only on JioSaavn.com
In Tokyo, a foreign ministry official said: "We have confirmed that disputed islands in South China Sea appear in a map printed on new Chinese passports.

"On the other hand, Senkaku doesn't. Therefore, we are not in a position to comment or complain."