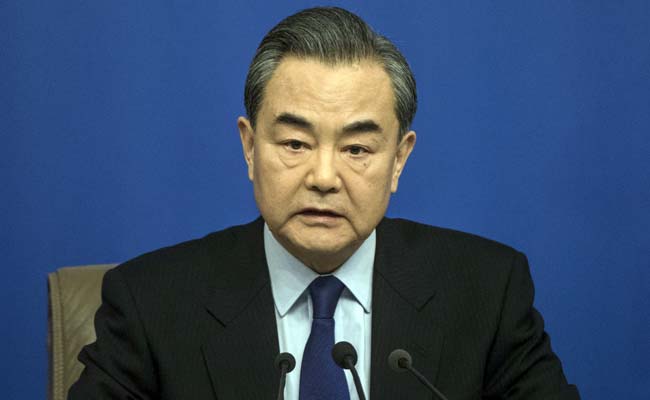 The more China develops, the more it can contribute to the world, said Foreign Minister Wang Yi (AFP)

Beijing: China's foreign minister sought Thursday to downplay concerns about Beijing's global ambitions, while also hinting at consequences for countries that don't fall in line on issues like Taiwan.

Pledging that China had no desire to "replace America" on the global stage, Wang Yi said the Asian nation's path "is totally different than the one that has already been taken by traditional major powers".

"The more China develops, the more it can contribute to the world," Wang said in a wide-ranging press conference.

Wang spoke as 3,000 members of China's mostly ceremonial national legislature have gathered for their annual meeting in Beijing, where they are set to grant President Xi Jinping a nearly limitless mandate to realise his vision of a resurgent China.

Xi's ambitions are not limited to home: he has clearly articulated his vision of putting China at the centre of world affairs, a position reflecting its Chinese name: "the Middle Kingdom."

The departure from the country's long-held stance of keeping a low profile had raised fears abroad of spreading Chinese influence.

On Thursday, Wang tried to strike a balance between reassurance and assertiveness, as Beijing deals with pressure from countries like the US to change its behaviour.

Here are some of the main takeaways:

As US president Donald Trump threatens a trade war with China, Wang warned that Beijing is ready to take an "appropriate and necessary response".

"China's development and rejuvenation can't be stopped," he said.

"Some Americans think that therefore China wants to replace the US's international role, but that is a fundamental strategic misjudgement."

China and the US "don't need to be rivals, they should be partners".

Nevertheless, China will not give an inch in the South China Sea, where it has built an archipelago of artificial islands hosting military facilities that the US and other nations say threaten freedom of navigation through the strategically vital waterway.

Beijing's "resolve to protect the peace and the stability of the South China Sea cannot be shaken", Wang said about the region, where it has overlapping territorial claims with the Philippines, Vietnam, Taiwan, Malaysia and Brunei.

The problems in the region are due to "foreign forces" which "have sent fully armed warships and fighters to the South China Sea to flaunt their military might", he said, referring to operations by the US, Australia and Britain to assert their right to sail through the region.

Although China does not recognise the self-ruled island as an independent nation, Wang took questions about Beijing's relationship with Taipei, warning that the Taiwanese government must come around to China's way of thinking if it hopes to enjoy "peaceful development".

The relationship between Beijing and Taipei has soured since the election of President Tsai Ying-wen, who has refused to acknowledge the so-called "1992 consensus", which agrees that there is only one China without specifying whether Beijing or Taipei is its rightful representative.

"The person who locked the door should open it," Wang said.

Only by taking the "correct path" of recognising the consensus can "cross-strait relations restart building a promising prospect for peaceful development".

Japanese Prime Minister Abe is expected to make a visit to China after years of tense relations set off by a territorial dispute and festering disagreements over the legacy of the Second World War.

After mocking a Japanese reporter's Chinese language skills, Wang said that China "wants the Japanese side to speak credibly in its politics, to behave properly in its actions".

Wang cautiously welcomed the apparent breakthrough over the North Korea nuclear issue as an "important step in the right direction".

He urged the US and North Korea to hold talks as soon as possible after Seoul said that Pyongyang was ready to discuss denuclearisation with Washington in return for security guarantees.

Promoted
Listen to the latest songs, only on JioSaavn.com
"Now is the crucial moment to test the sincerity of the parties to solve the nuclear issue," he said.