President Donald Trump -- who frequently denounced China on the campaign trail -- has turned to Beijing to help rein in North Korea's weapons programme, prompting concerns among Asian allies that America might go easy on the South China Sea territorial dispute. 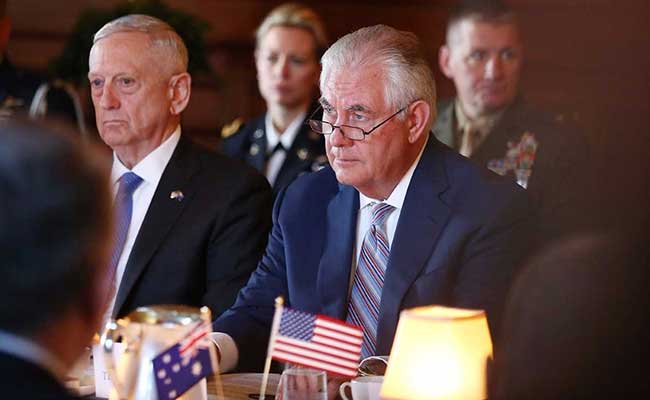 Sydney: China cannot use its economic power to dodge its international responsibilities in the South China Sea and in deterring North Korea, US Secretary of State Rex Tillerson warned Monday.

After talks in Australia, Tillerson insisted Washington wanted a productive relationship with Beijing, but said China must pull its weight on important diplomatic issues.

"We desire productive relationships," he said after annual discussions with his Australian counterpart Julie Bishop in Sydney.

"But we cannot allow China to use its economic power to buy its way out of other problems, whether it's militarising islands in the South China Sea or failing to put appropriate pressure on North Korea.

"They must recognise that, with a role as a growing economic and trading power comes security responsibilities as well."

President Donald Trump -- who frequently denounced China on the campaign trail -- has turned to Beijing to help rein in North Korea's weapons programme, prompting concerns among Asian allies that America might go easy on the South China Sea territorial dispute.

But Tillerson echoed comments by Pentagon chief Jim Mattis on Saturday in voicing opposition to China's construction activities in the area, which is subject to overlapping claims.

"The US and Australia reaffirmed our commitment to freedom of navigation and overflight and other lawful uses of the seas, particularly the South China Sea and elsewhere, to ensure unimpeded flow of lawful commerce in a rules-based order," he said.

"We oppose China's artificial island construction and their militarisation that features in international waters."

China claims nearly all of the South China Sea, despite partial counter-claims from Taiwan and several Southeast Asian nations including the Philippines, Brunei, Malaysia and Vietnam.

It has rapidly built reefs into artificial islands capable of hosting military planes.

Tillerson added that Australia and the United States "speak with one voice in calling for North Korea to abandon its illegal nuclear weapons program".

"China and other regional partners should also step up their efforts to help solve this security situation which threatens not just that region, but really presents a threat to the entire world," he said.

(Except for the headline, this story has not been edited by NDTV staff and is published from a syndicated feed.)
Comments
South China sea confictUS China disputeUS Secretary Rex TillersonPentagon chief Jim Mattis