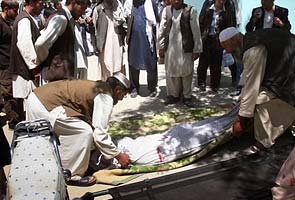 The boy -- thought to be one of the country's youngest-ever suicide attackers -- detonated a vest packed with explosives in a marketplace in Paktika province, on the border with Pakistan, provincial spokesman Mukhlis Afghan said in a statement.

"The head of Shkin district council, Shair Nawaz, a woman and two other men were killed and 12 others were wounded," the statement said.

The Afghan interior ministry had earlier put the death toll at three, with 11 wounded.

Promoted
Listen to the latest songs, only on JioSaavn.com
Civilians are increasingly getting caught up in the violence that has blighted Afghanistan since a US-led invasion in 2001 ousted the Taliban, triggering an insurgency whose intensity has increased in recent years.