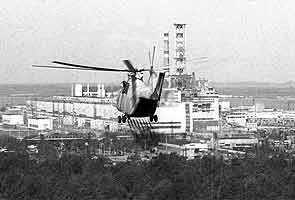 In this file photo, a helicopter throwing chemicals
to suppress radiation near the Chernobyl
nuclear power plant. (AP)

Kiev (Ukraine): A bell in Ukraine's capital has tolled 25 times for the number of years that have passed since the Chernobyl disaster, as the world began marking the anniversary of the worst nuclear accident in history.

Several hundred Ukrainians, mostly widows of plant workers and those sent in to clean up after the explosion, attended a service near a monument to the victims.

Teary-eyed, they held candles and crossed themselves to the sound of Orthodox chants.

Russian Orthodox Patriarch Kirill, who led the service early Tuesday, said "the world had not known a Catastrophe in peaceful times that could be compared to what happened in Chernobyl."

Promoted
Listen to the latest songs, only on JioSaavn.com
The blast on April 26, 1986, spewed a cloud of radioactive fallout over much of Europe and forced hundreds of thousands from their homes.