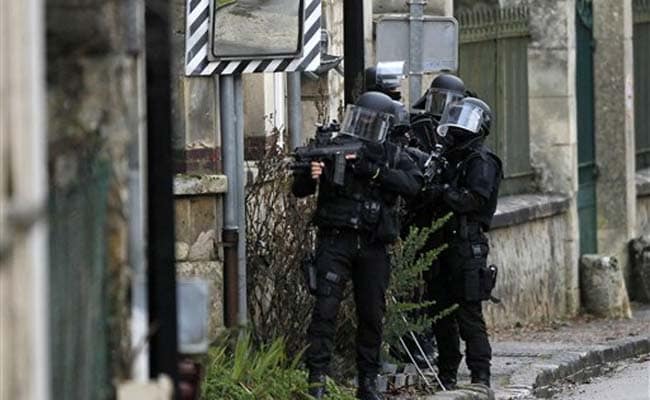 SWAT police officers patrol in the village of Longpont, north east of Paris, hunting down the brothers suspected in the massacre at Charlie Hebdo newspaper (Associated Press photo)

Paris: Two suspects in the storming of a satirical French newspaper that left 12 people dead have stolen a car and are on the move again as shots were fired in a small French town, a security official said Friday.

The two, brothers with Al Qaeda sympathies, stole a Peugeot on Friday morning in the town of Montagny Sainte Felicite, about 50 kilometers (30 miles) northeast of Paris, the official said.

The official spoke on condition of anonymity to discuss a situation that was still developing.
Thousands of French security forces have mobilized to find the brothers after the attack on the Charlie Hebdo offices on Wednesday.

Police SWAT teams have swarmed a region north of Paris, fearing a second strike by the suspects, who are described in a nationwide notice as "armed and dangerous."

One brother was convicted of terrorism charges in 2008, and survivors of the bloody assault on Charlie Hebdo said the attackers claimed allegiance to Al Qaeda in Yemen. The weekly newspaper had been repeatedly threatened - and its offices were firebombed in 2011 - after spoofing Islam and depicting the Prophet Mohammed in caricature.

Heavily armed security forces with air cover moved along country roads and among old stone buildings. The country's maximum terror alert was extended from Paris to the northern Picardie region, focusing on towns that might be safe havens for Cherif Kouachi, 32, and Said Kouachi, 34.

Promoted
Listen to the latest songs, only on JioSaavn.com
Prime Minister Manuel Valls said both men were known to intelligence services.

A third suspect, 18-year-old Mourad Hamyd, surrendered at a police station Wednesday evening after hearing his name linked to the attacks. His relationship to the Kouachi brothers was unclear.