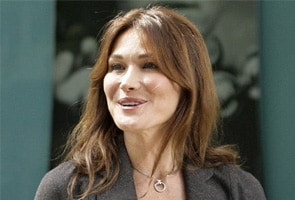 Paris: Former French first lady Carla Bruni-Sarkozy backed controversial plans for France to legalise gay marriage in an interview with Vogue that sees the 44-year-old return to her supermodel roots.

In an interview appearing in the magazine's December issue with a 20-page photo shoot reminiscent of Bruni-Sarkozy's time as a top model in the 1990s, she admitted she disagreed with her husband on the question of gay marriage and adoption.

"I am rather in favour of gay marriage and adoption, I have a lot of friends -- women and men -- who are in this situation and I see nothing unstable or perverse in families with homosexual parents," she said.

French President Francois Hollande, who defeated Sarkozy in a May presidential election, is pushing plans to legalise same-sex marriage and adoption despite fierce opposition from Catholics and rightwing groups, including most of Sarkozy's UMP party.

Bruni-Sarkozy refused to answer questions about her husband's future political career, saying only: "It was a beautiful adventure, but today I just want to go back to being a citizen like any other."

Promoted
Listen to the latest songs, only on JioSaavn.com
Bruni-Sarkozy, a model and singer whose fourth album will be released next spring, married the divorced Sarkozy in 2008.