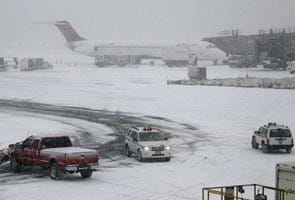 New York: Airlines are canceling hundreds of flights in the snowy Northeast, but they say travellers won't face the same nightmare that occurred right after a Christmas weekend storm.

It will be easier to find new seats for stranded passengers because planes aren't as full in mid-January as they were during the holidays, according to the airlines.

American, Delta and other airlines had already canceled hundreds of flights by Wednesday morning, and travel in and out of New York and Boston was very limited.