Canadian Prime Minister Justin Trudeau has said he would not sign a bad deal. He faces domestic political pressure to maintain Canada's dairy import regime, which Trump has targeted. 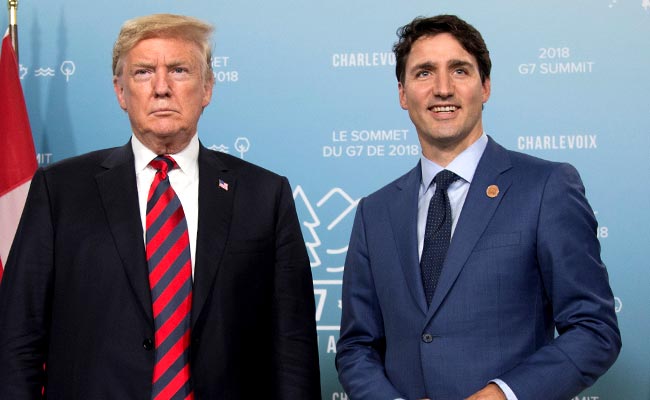 President Donald Trump has threatened to proceed alone with a new pact with Mexico.

The United States and Canada reopened talks on Wednesday in a bid to salvage the North American Free Trade Agreement amid a threat by President Donald Trump to proceed alone with a new pact with Mexico.

Canada will want assurances that it will be permanently exempted from steel and aluminum tariffs imposed by the Trump administration as well as from proposed duties on autos, which Washington has sought to use as leverage in the talks.

Trump charges that the 1994 pact, which underpins $1.2 trillion in trade between the three countries, has caused the loss of hundreds of thousands of U.S. jobs, a statement that most economists dispute.

Canadian Prime Minister Justin Trudeau has said he would not sign a bad deal. He faces domestic political pressure to maintain Canada's dairy import regime, which Trump has targeted.

The two countries also are at loggerheads over a dispute settlement regime that Washington wants abolished. Negotiators failed to strike a deal last week.

"Our officials have continued to work hard and constructively over the weekend," Canadian Foreign Minister Chrystia Freeland said as she entered the talks in downtown Washington.

Data released on Wednesday showed the U.S. trade deficit hit a five-month high of $50 billion. The shortfall with Canada shot up 57.6 percent to $3.1 billion.

Trump has notified Congress that he intends to sign a trade deal reached last week with Mexico by the end of November and officials said the text would be published by around Oct. 1.

But Canadian officials, who note increasing political pressure on Trump from U.S. business and labor circles to keep NAFTA as a trilateral arrangement, said they were in no hurry.

"We're not saying we don't want to move swiftly to try and get a deal. But I think certainly we were always intending to take as long as it was going to take," said a government source who declined to be identified given the sensitivity of the situation.

"We're seeing goodwill on all sides and if we see some more flexibility, then I think we can start to see things moving in a good direction," added the source.

Negotiators have blown through several deadlines since the talks started in August 2017. As the process grinds on, some in Washington insist Trump cannot pull out of NAFTA without the approval of Congress.

"Trump is relying on bluster and bullying in a desperate attempt to get Congress to swallow his half-baked deal. You can't fix NAFTA without fixing issues with Canada," said Senator Ron Wyden, the top Democrat on the Senate Finance Committee, which oversees trade.